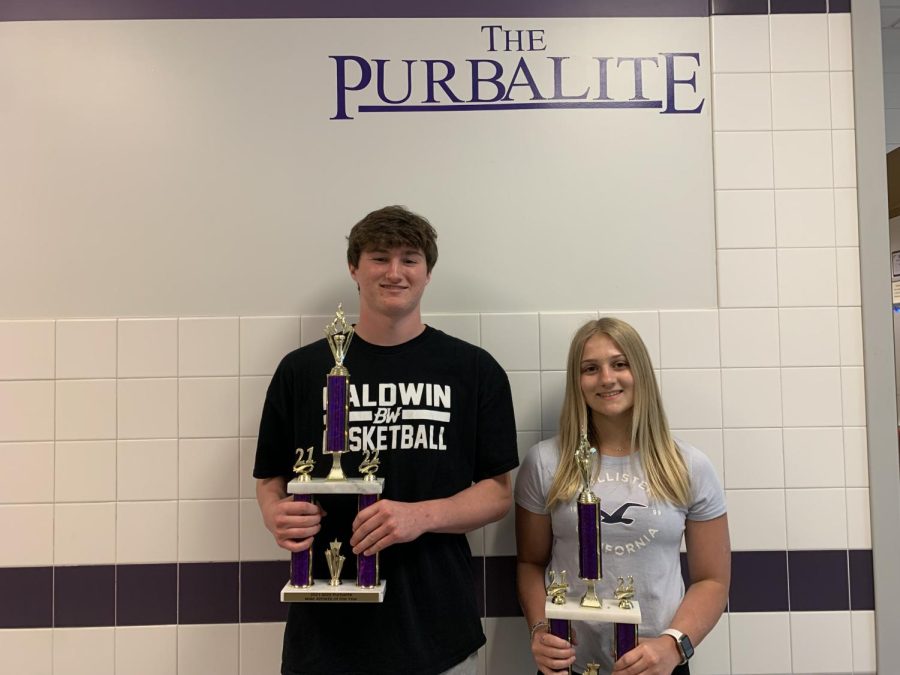 Junior James Wesling and freshman Abby Rexrode are the Purbalite Athletes of the Year.

Purbalite Athletes of the Year demonstrate excellence in their sports

On the night junior James Wesling ended up breaking the school’s record for most points scored in a single basketball game with 48 points, he had known the game was going to be special after his first few shots.

“After my first couple shots went in, I could tell that I was feeling it and knew it was going to be a big game for me. But never thought I would’ve beaten the record,” Wesling said.

In addition to this feat, he was able to maintain this success throughout the season, which allowed him to score a total of 415 points. This stellar season has led to Wesling being named the 2021-22 Purbalite Male Athlete of the Year.

Wesling was happy to celebrate with his teammates after breaking the single-game scoring record.

“It was a great feeling knowing that I was able to beat a school record, and it was even better that I got to celebrate it with my friends who helped me beat it,” Wesling said.

Wesling started playing basketball in second grade, inspired by his dad’s passion for the game.

“My dad inspired me to play because he played as a kid and is a coach, so I was always in the gym with him,” Wesling said.

Wesling has played on the varsity basketball team since his freshman year, and he has worked hard to improve his skills. He cites his family as his motivation to continue playing.

“My family motivates me to play through all the ups and downs of basketball,” Wesling said.

Playing alongside James on varsity is his younger brother, Nate Wesling, a freshman. Nate said that playing with his brother made his freshman season memorable.

It was a great feeling knowing that I was able to beat a school record, and it was even better that I got to celebrate it with my friends who helped me beat it”

“It’s definitely something that is special to my family and me. It’s good to know as a freshman that I had him to look up to and rely on when needed,” Wesling said.

When James Wesling broke the record, Nate was ecstatic, but he promised himself that he would break James’ record some day.

“I was in shock that whole game because everything he shot felt like it went in. I was excited for him. But out of our competitiveness, I promised him I would beat it,” Wesling said.

“I was on the court and I ran over and hugged him. It was a huge moment even for me because we would talk about it,” Cherico said. “It felt great to watch him get it because he deserved it.”

“James evolved from the quiet kid on the team to a vocal leader. I would describe him as dedicated, the way he always wants to work on his game,” Cherico said.

The team is looking forward to playing again with Wesling as a captain because of his leadership abilities and strong guidance.

“James was a captain this year so I just expect the same attitude out of him to bring us a winning season,” Cherico said.

After a great season, Wesling has already started to set goals for himself and his team for next year.

“I’m hoping that the team will be able to become the first boys basketball team in Baldwin history to win a WPIAL championship, and even push for a state championship,” Wesling said.

With three years left in her high school career, freshman Abby Rexrode has already taken home first not just in WPIALs, but also in the highest Diamond division at states.

Because of those accomplishments, Rexrode has been named the 2021-2022 Purbalite Female Athlete of the Year.

Joining the Baldwin gymnastics team this year did not come as much of a change for the freshman, since she has been competing in meets and competitions for her sport since age 3. The WPIAL and state competitions, however, brought nerves – more for WPIALs because that event took place first.

“I was a little nervous for that competition, but it felt like other competitions because I have been in gymnastics for so long and have had many big meets,” Rexrode said.

During gymnastics meets, athletes are scored on four main events: vault, beam, bars, and floor.
It was after her performance on beam that Rexrode knew she had a chance at first place in the Diamond division at states.

“After I scored really well with a good routine on beam, I knew I had a chance. The only event left was floor, and I was pretty confident I would do well,” Rexrode said of her states performance.

It might seem that, having won states as a freshman, there would be no other goals for Rexrode to attain. But she has moved up in the national gymnastics competition levels, which will keep her practicing more hours to develop her skills.

She is amazing at everything, but she does crazy tricks on beam and floor. She always does the tricks amazingly and lands them perfectly”

“I am moving up to level 10 in USA Gymnastics, so that will require me to work hard and get all the skills I need and make them ready to compete,” Rexrode said. “I will be using those new tricks I learn for high school routines as well.”

Rexrode is grateful for a high school team that welcomes all new members with open arms and continues to tighten their relationships as seasons progress and new seasons begin.

“The team was really supportive and welcoming and can calm me down easily,” Rexrode said.

Her dedication to gymnastics does not go unnoticed. Junior Sophia Pittman said Rexrode has a positive and hard-working mindset.

Pittman said she knew of Rexrode’s success before the freshman even joined the high school’s gymnastics team.

“She was a USAG gymnast for years before joining the high school team, so we were excited to have her be an addition to our team,” Pittman said.

“She is very determined. She is very hardworking and never fools around. She is overall really great during practices,” Schwab said.

Schwab said she believes Rexrode excels in the floor and beam areas of gymnastics.

“She is amazing at everything, but she does crazy tricks on beam and floor. She always does the tricks amazingly and lands them perfectly,” Schwab said.

Schwab said she was already aware that Rexrode would become great before joining the team.

“I kind of knew her before she joined the high school team. When she came in the summer, she was whipping out these amazing tricks and she was just insane,” Schwab said. “It was surprising because she was a freshman. We knew she would be an amazing addition.”