Christmas, while being very popular, is not the only holiday celebrated during this season.

The 14 School Days of Christmas: Remember, not everyone celebrates the holiday

As a kindergartener from a refugee Hindu family, being faced in grade school with so many Christmas songs and activities was confusing and even frightening at times. Because I didn’t celebrate Christmas and wasn’t Christian, I started to feel like I didn’t belong in the classes that I had started to get comfortable in.

Many people who do celebrate the holiday might see those who raise this issue as whiners or people raining on their parade. But most people don’t realize what it’s like to be in the shoes of a person who has been isolated simply because he or she doesn’t celebrate Christmas.

In school, it always felt as if Christmas was forced upon everyone, even those who didn’t celebrate it. Everything during December seemed to revolve around Christmas. We had to listen to Christmas music, color Christmas pages, and read Christmas stories.

It felt as if the minority of students who didn’t celebrate the holiday were left behind simply because the majority celebrated it. The popularity of Christmas made me feel like I would have needed to celebrate it to feel “normal.”

It happens less frequently in high school. But even this column is a part of my school newspaper’s holiday series called “The 14 School Days of Christmas.”

The idea of bringing a religious holiday into public schools is questionable as it is. It’s probably unrealistic to expect that a holiday with such a massive following would not be included in at least some school activities, but a recognition of the diversity that makes America so great would be appreciated.

And what about all the other holidays that get no or little recognition?

Holidays during December such as Hanukkah, Kwanzaa, Ōmisoka, and St. Lucia Day have little or no representation in general. Since most people in America celebrate Christmas, it’s probably natural that some time is spent on Christmas activities in elementary grades. But why do we spend little or no time on all the diverse holidays from throughout the world?

There is no need to get rid of everything Christmas related, but there should be room for other holidays this season.

I’ve come to the realization that I could hop on the bandwagon and celebrate Christmas anyway, but deep down, it would feel wrong. The fact that it’s a holiday centered around a religion that I do not follow makes it feel more wrong.

No one should ask for a complete ban on Christmas in schools, but it would be nice if teachers and students kept in mind that not everyone celebrates Christmas. 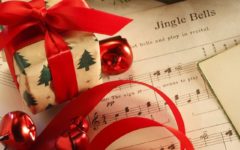