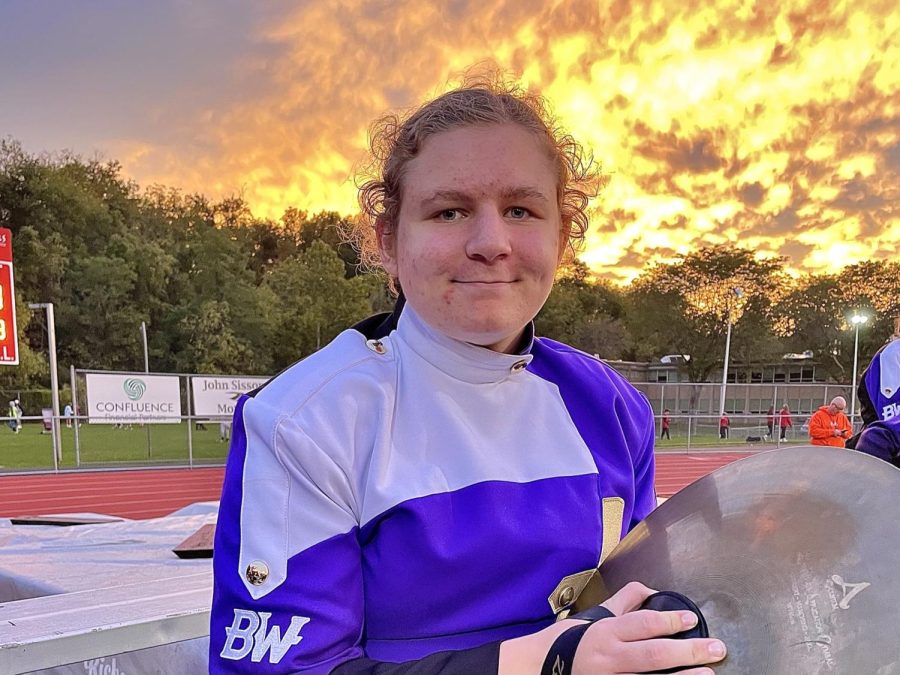 Freshman Leland Lepperd is in his second year playing for the marching band.

Freshman Leland Lepperd loves to help and uplift his marching band teammates through cracking jokes and his immensely positive attitude.

His teammate, junior Kathryn Weber said his positive personality has a great effect on the marching band.

“He’s very spirited about everything and gives multiple hugs for multiple people. He’s there for you if you need to talk,” she said.

Weber, a close friend of Lepperd’s, also praised his habit of keeping the team in good spirits after close losses.

“He tells the team we tried our best even if we lose. He never seems sad about losing. He really brings up the atmosphere,” she said.

Lepperd himself attributes his positivity to being relentlessly himself.

“If I’m in public, I try to make a good impression on people by just being myself,” he said.

Junior Matthew Colwell, a fellow band member, praised Lepperd for his personal investment in the marching band and his wonderful sense of humor.

“Leland’s impact on the marching band is in his sense of humor and how he can make everyone laugh. In terms of music, he has plenty of experience with instruments and is not afraid to try new things,” Colwell said. “He’s a true band enthusiast.”

Comically, this humor can, at times, cause him some trouble.

“I just goof off and tell jokes even when we’re not supposed to. When people tell me to cut it out,

I’m still cracking jokes because that’s who I am,” Lepperd said.

Even with his sometimes unfortunate timing, Lepperd is a great friend to everyone in the marching band.

Being a freshman, Lepperd has several years left in his high school career with the marching band, and Colwell believes in him.

“I have full reliability in Leland. He will step up to my place and lead the front ensemble,” Colwell said. “Next year I plan to help him by teaching the leadership skills that I know to him.”

Lepperd first joined band in fourth grade, and later joined the high school marching band as an eighth grader. In his first year of marching band, Lepperd decided to focus solely on the synth, a part of the percussion section.

“I started playing because my friend played the synth, but then they put me in synth 1,” Lepperd said.

Lepperd’s favorite part of marching band performances are the crowds.

“I like the rush of playing in front of a crowd,” he said. “It feels like the audience is only there for you.”

Another great aspect of Lepperd’s marching band membership is his work ethic.

Colwell is excited to see how Lepperd grows throughout his four years at BHS.

“Leland is an amazing kid who I can see growing into a great musician,” he said.