Steelers quarterback Mitch Trubisky was benched in the second half of the game on Sunday.

On Sunday, the Pittsburgh Steelers benched quarterback Mitch Trubisky for rookie Kenny Pickett. Once in, Pickett did not look ready for the moment even through the sparks of potential he did show.

Now the Steelers have announced that Pickett will start Sunday against Buffalo. This is the wrong decision.

When the Steelers drafted Pickett, many fans assumed he would be a Day 1 starter. But after a disappointing camp and having Trubisky outplay him, the Steelers chose Trubisky. That should have been the first warning to Steelers fans that even though Pickett was already 23 when he was drafted, he still was not ready for the NFL.

In the two quarters Pickett played on Sunday, he threw three interceptions. Some fans are maintaining that he truly only had one interception, as the others should have been caught. But that does not change any of the stats.

Trubisky was not given a fair opportunity, as the offense seemed to baby both quarterbacks too much. Trubisky is known for being able to create big plays either with his legs or his arm. Pickett does not have anywhere near the same arm strength as Trubisky, as fans saw in the interception that was intended for Chase Claypool.

Pickett did bring the intensity to the stadium when he was subbed in and now everyone has hopped on the Pickett bandwagon since he is the Pittsburgh kid.

But Trubisky is more skilled, prepared and still has more potential than Pickett ever will. With only a four-year age difference between the two and Trubisky already entering his sixth season, he should have been the starter for longer than what the Steelers have given him.

Additionally, considering the next four games on the schedule and how unlikely the Steelers are to win any of them, the team is just putting Pickett in danger. Each of the four teams the Steelers will play has a stellar defensive line. Putting them up against a struggling Steelers offensive line will only mean that Pickett will have minimum time in the pocket and will most likely be sacked more than he ever has.

Trubisky should be starting the rest of this year and maybe next, letting Pickett learn under his wing and preparing him for the future. Pickett is nowhere close to being ready enough to be a starter for a team that should be contending considering their roster.

Steelers right to move on to Pickett 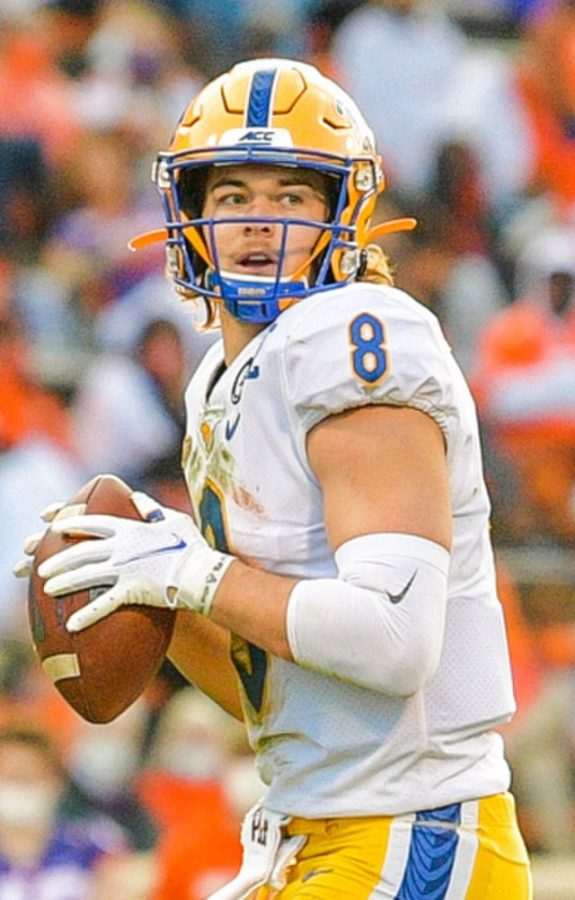 Steelers quarterback Kenny Pickett played the second half of last Sunday’s game and will be the starter this week.

On Sunday afternoon, during a game against the Jets, the Steelers coaching staff put Kenny Pickett into the game, benching Mitch Trubisky.

This situation was bound to happen eventually, because when a team claims that they have two quarterbacks, they really have none.

Acrisure Stadium erupted as Pickett went into the game, with fans showing their love for the former Pitt Panthers quarterback. This was the first true taste of what the franchise will look like moving forward, and the Steelers will start him Sunday in Buffalo.

Trubisky and Pickett are similar in talent. The only advantage to Trubisky is his experience.

At this point in the season, a playoff appearance looks out of reach. It would be better to start Pickett and get him some NFL experience so he can grow into being an elite quarterback.

Pickett also has a lot more potential than Trubisky. Trubisky has proved to NFL fans over the years that he is nothing more than a below-average quarterback. Pickett has time to develop and gain knowledge to become an offensive weapon for the Steelers.

Although Pickett threw three interceptions last Sunday, his performance was not terrible. Two of the interceptions could be blamed on the receivers. He threw accurate passes, but unfortunately they were tipped up by Chase Claypool and Pat Freiermuth and then intercepted.

He also had two rushing touchdowns, proving that he is more mobile than Trubisky. His young legs can help the Steelers in a jam, especially with an offensive line that is ranked 30th out of the 32 NFL teams.

Pickett also targeted George Pickens more during the second half than Trubisky did in the first four games of the season. From what was seen, the Pickett-Pickens chemistry could be a very important piece of the team moving forward.

Pickett should be the starter for the rest of the year. Trubisky should be traded for an offensive lineman so the Steelers can start to partially rebuild their organization.

As Pickett settles in, he will become more comfortable and play better than he did against the Jets.