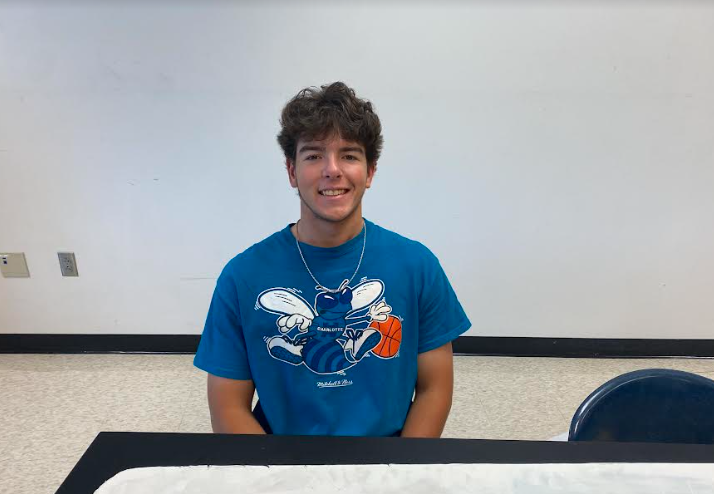 Every young athlete’s dream is to go pro in the sport of their choice, and senior golfer Carson Gregg hopes to do so, in a way, by pursuing a career in golf course management.

Gregg also plays volleyball and will be part of the fall play, but those are hobbies for him. It’s golf that he hopes to turn into a career. He wants to study professional golf management in college and become a club pro at a country club someday.

“I don’t want to own a country club, but be the head professional at one. I like the interaction between pros and their members,” Gregg said. “It shows a true connection. I want to help people become their best selves or golfers.”

Gregg has had his eyes on this career path since his junior year, he said.

“South Hills Country Club really helped me decide what I wanted to do,” Gregg said.

Gregg works at the country club as a caddie. Through his work there, he learned about the Chick Evans Caddie Scholarship.

Winners of the scholarship receive “a full paid scholarship … so their motto is `sending caddies to school, paying for all four years,’ ” Gregg said. One of the participating universities is Penn State, which offers a professional golf management program that focuses on business aspects, hospitality, and turf management.

Gregg has already applied to Penn State. He also is looking at Cal U and Campbell University in North Carolina if he does not get the caddie scholarship, Gregg said.

As a member of Baldwin’s golf team, Gregg believes that the biggest aspect of the sport is that it builds perseverance.

Something that Gregg has to improve in his own golf game is his second shot after teeing off.

“I will have a nice drive and become really impressed, which leads me to lose focus,” he said.

The varsity golf team has not had much success this year, but the team has become closer.

“My most memorable moment this year has been playing with the varsity kids after a match, getting to know each other better,” Gregg said.

Senior Nolan Malloy compliments Gregg on his style of play.

“He plays in a methodical and passionate way. I wish I had everything in Carson Gregg’s game. He is a very skilled and knowledgeable player,” Malloy said.

As for his participation in theater, Gregg used to be much more involved, but when high school came along, his interest in golf and volleyball took precedence, he said.

Senior Joey Priano praised Gregg’s ability to find balance with all these activities.

“He is a very talented person. Being able to showcase both his talents – at either theater or the various sports he plays – can sometimes seem stressful. But he does a great job of balancing it,” Priano said.

Priano has been involved in theater just as long as Gregg.

“I have been in musicals with Carson since fifth grade and have watched him grow and improve throughout the many years of acting together,” he said.

This year’s winter play is Clue, which is a murder investigation.

“The story is that all the characters are being blackmailed and are locked in the house until the police arrive,” Gregg said.

Gregg got one of the lead roles: Professor Plum.

“I’m really excited for the show,” he said. “Clue is one of my favorite movies and we have a great cast to portray the characters.”