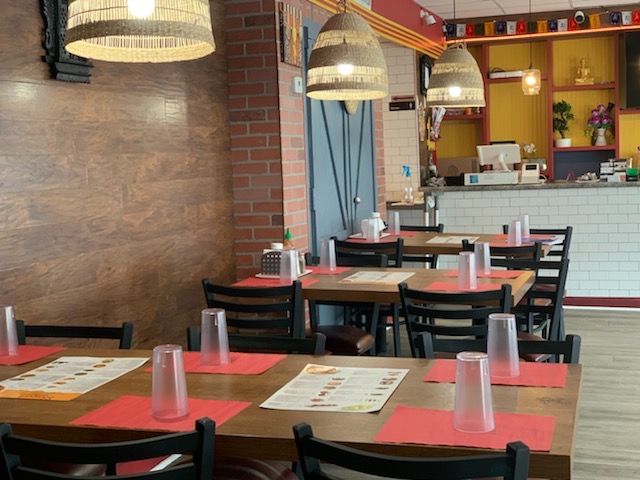 The interior of Sagun Asia, located at 4871 Clairton Blvd.

After settling down in America, the owners of Sagun Asia decided it was time to start something new and opened a restaurant to celebrate their heritage.

The vibes at this restaurant are welcoming, cozy and spiritual, with multiple aspects of  Hinduism and Buddhism incorporated into the interior design. As soon as customers enter, they are welcomed with a statue of Ganesh, who symbolizes the end of obstacles. So diners can leave their worries at the door and go into a world of South Asian cuisine.

Once the patrons are seated, they can look around and find different aspects of Asian traditions, including Nepali musical instruments from the country’s different ethnic groups, and symbols such as flags and Buddha statues to exemplify the Buddhist side of Nepal.

Sagun opened Summer 2021, and has been serving customers with Nepali courtesy ever since. The food served at the restaurant can be spicy, so the chefs are open to making alterations.

“All of our food is made by hand in the restaurant itself,” head chef Bikash Chhetri said.

Sagun offers a variety of traditional Nepali and Indian cuisine, the most popular dishes being sekwa, which is roasted meat; momo, a Nepali version of dumplings; thalis, a plate containing rice, lentils, and a variety of curries and pickles; traditional fish dishes, and desserts.

“I eat here with my family often. My children really like their momo,” customer Hari Adhikari said.

The restaurant, which was featured in Pittsburgh Magazine, believes in treating its customers as family.

“We get satisfaction when customers enjoy their meals,” Chhetri said.