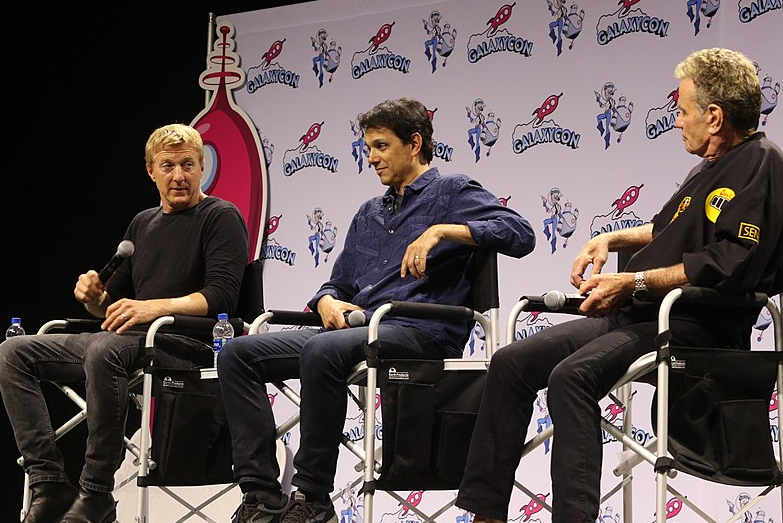 Is ‘Cobra Kai’ a disgrace to martial arts or a fun continuation of ‘The Karate Kid’ series? Two members of The Purbalite Staff debate.

`Cobra Kai’ is a disgrace to martial arts

Martial arts is an ancient art glorified by the entertainment industry, most notably by mixed martial art franchises such as the UFC.

Yet martial arts has a history of thousands of years in many different continents and is built on layers of respect that have gone into years of technique training. Those who choose to learn a martial art must be prepared to go through both mental and physical tests.

When the media attempts to portray martial arts, it can go one of two ways. Martial arts can be shown as the sport that it is: a great way to stay fit while practicing self discipline and respect.

But shows such as Cobra Kai and Kickin’ It portray martial arts comically. Both series are labeled as “action comedies,” with Cobra Kai being a spinoff of the The Karate Kid saga.

The Karate Kid saga shows a respectful approach to the arts through Mr. Miyagi’s teachings, but the fights and unrealistic rivalries contradict the respect taught by all martial arts. Cobra Kai capitalizes on the theme of lacking discipline, as the show tells the story of rivals Daniel LaRusso and Johnny Lawrence.

The two men’s rivalry from Karate Kid spreads to their students, who engage in fights outside of competitions and sparring matches. These fights make up the majority of the action scenes in Cobra Kai.

The teachings of Cobra Kai are a mix of mixed martial arts and taekwondo. In the first three seasons, the students only focus on sparring. This is only part of taekwondo, which has sections in forms, weapons, self defense, and board breaks.

In the recently released fourth season, board breaks, weapons, and forms are briefly addressed in the All Valley Tournament. This is appreciated, as it pays mind to other important factors to martial arts.

The show also does a decent job of demonstrating taekwondo techniques commonly taught, such as the superman punch, axe kick, and floor takedowns.

For the most part, the sparring matches and fights pictured in Cobra Kai are just demonstrations of technique. Half the moves used are not for practicality and would never be used in a real sparring match.

Half the moves used are not for practicality and would never be used in a real sparring match.”

Fighters in the real world don’t take the time to use physically appealing kicks. They use their dominant leg and keep a closed profile.

Many characters from Cobra Kai have noticeable jewelry on during competitions. This is highly unrealistic, as that person wouldn’t be able to fight.

Likewise, a mouth guard is required to spar in martial arts and even in the UFC. No mouthguards are worn during the All Valley competition in the series. Although this might affect an actor’s diction, it would be nice to see this rule portrayed.

Critiquing this lighthearted show may seem a little harsh, but when it comes to something as sacred and respected as martial arts, jokes aren’t meant to be made.

Series may be unrealistic, but that makes it fun

With the fourth season released and season five on the way, Cobra Kai has proven to be one of the most viewed series in the country.

The show is a continuation of the storyline from the Karate Kid movies. Ralph Macchio, who plays Daniel Larusso, and William Zabka, who plays Johnny Lawrence, are back at it as they are forced to work together and prepare for the All Valley tournament.

Xolo Maridueña (Miguel), Mary Mouser (Sam), Tanner Buchanan (Robby) are up and coming actors who are main characters in the show. Disney stars Peyton List and Jacob Bertrand are also involved in the show as well.

While the acting is mildly terrible and the plot is definitely unrealistic at times, this series has proven to be an addictive, binge worthy show.

In fact, shows that have some unrealistic moments tend to be the most addictive shows. Whether it is a small detail or it is an entire situation between characters, those moments can be defining ones in the franchise’s storyline.

In fact, shows that have some unrealistic moments tend to be the most addictive shows.”

As the series moves on, it continues to bring back older characters from all three Karate Kid movies. Introducing Krease (Martin Cove) to the series was a smart move, though this continual bringing back of earlier characters is getting to be too much.

People who understand martial arts might be underwhelmed due to inaccurate portrayals in the show. However, for other viewers, these fight scenes are iconic and fun because they are entertaining and exciting to watch. The flips, kicks and high-action fighting scenes really make all the hype for the show.

As the plot continues to thicken, Cobra Kai is a show worth watching and binging. It has great dialogue and strong connections between the characters. This series really proves that shows with unrealistic qualities can still be amazing.