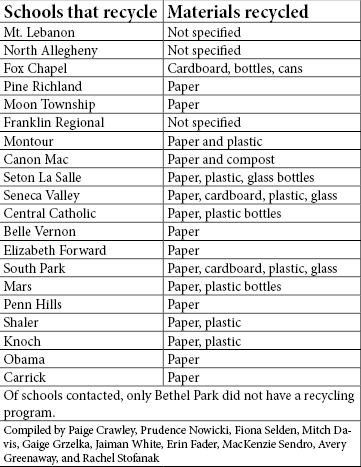 With no plan on the horizon, some teachers start their own programs

With administration having no immediate plans to restart a schoolwide recycling program, some teachers have decided to set up their own individual recycling programs in their classrooms.
Baldwin did have a recycling program, but that ended several years ago. In spring 2017 there were tentative plans to restart the program, but that has not happened.
Supt. Dr. Randal Lutz said he would like to have a recycling program return, but a number of issues would have to be worked out before that could happen.
The problem with the original recycling program, Lutz said, was that students sometimes put waste into the recycling bins, contaminating the recyclable material. That led custodians to sometimes mix the trash with recyclables when they cleaned classrooms, he said.
Also, the waste company that sends trucks to pick up the trash started sending only one truck. So ultimately waste and recyclable material would be mixed, Lutz said.
Today there would be additional issues with a schoolwide program, he said.
“With the small custodial staff we have, it would be very difficult for them to all make two runs to pick up the trash and recycling,” Lutz said.
The market for recycled materials also has changed.
“It seems as if recycling is not as profitable and not many places will take it anymore,” he said.
Many Baldwin teachers, however, are not happy with the lack of schoolwide recycling and have decided to start their own programs in their classrooms.
Counselor Caroline Babik expresses her passion for recycling in many ways. This is her fifth year talking to clubs such as the National Honor Society and the Service Club about the importance of recycling.
“It hurts my soul that we don’t recycle even simple things like paper or plastic bottles,” Babik said. “We don’t have to be destructing our world anymore.”
Once a month Babik takes her own used paper, along with paper other teachers bring her, to her home to be put out with her own recycling. She recycles everything she can and uses things made out of recycled materials. She also takes her paper shreddings to Animal Friends, where it is used as bedding.
Spanish teacher William Dodds put a recycling bin for paper in his classroom as soon as he saw there was no longer a schoolwide program. His system works similarly to Babik’s, where he empties his bin at home with his household recyclings.
“I feel it is my personal duty to recycle, considering the amount of paper we use in the classroom,” Dodds said
Math teacher Maria Hausman also has a classroom recycling bin. She said she feels it is necessary to have and that it teaches kids responsibility. She also tries to limit her use of paper by giving students more online assignments.
After hearing that other teachers have set up their own recycling efforts, science teacher Elizabeth Giles decided to start her own bin for mainly plastic materials.
“Plastic is something that doesn’t go away. So if we are to use it, we should recycle it so we can keep reusing it and reusing it,” Giles said.
Lutz said that such actions by teachers throughout the school would be essential for restarting a program at Baldwin.
“A program could happen, but it is going to have to happen with the support of teachers and students. They cannot just see it as a problem,” Lutz said. “The only way for it to be successful is if we get grassroots from teachers doing it by themselves, showing they care enough to make it happen.”
Lutz agreed with the teachers that having a program would not just benefit the environment but the students as well.
“I would like to see it come back,” Lutz said. “If we’re trying to get kids to be good neighbors, how could we not promote and teach them recycling?”