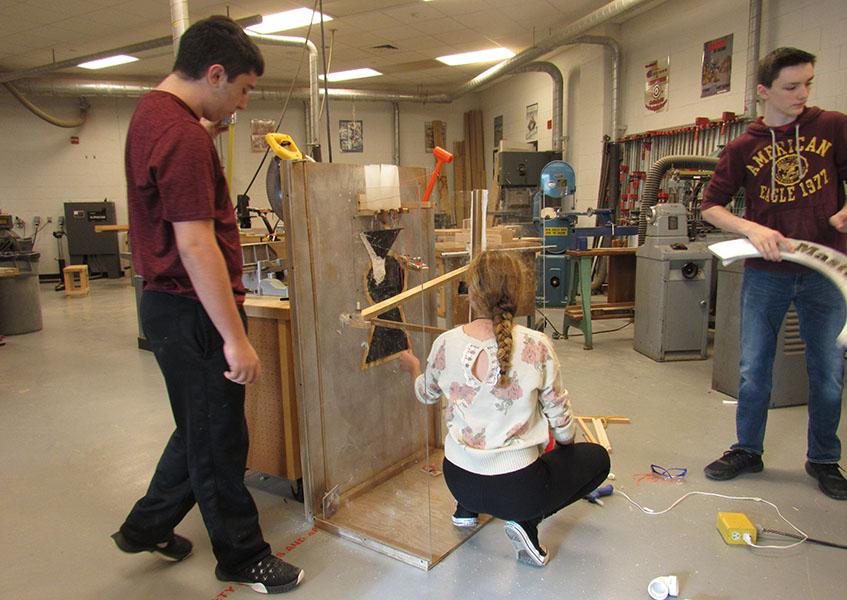 Many people don’t exactly know what a “chain reaction contraption” is, but everyone knows what a line of dominos looks like falling in a successive order.
That’s the basic idea behind a chain reaction contraption, and 44 area schools, including Baldwin, built their own versions for a competition Dec. 9 at the Carnegie Science Center.
Gifted coordinator Jared Hoffman led a team of students in the design and construction of Baldwin’s contraption for the event.
Each team picks a theme for their contraption. Last year, Baldwin’s theme was “Tell a Story,” with the contraption portraying the stories of multiple nursery rhymes.
This year the Baldwin team decided on the theme “Lock It Up and Unlock It,” with the machine modeled around the opening and closing of a lock.
A chain reaction consists of a series of events, with each event caused by the previous one.
In previous years Baldwin has won awards in various categories, but this year the team struggled to get the machine working properly. Still, the process was a worthy one that provided benefits, junior Charli Hooper said.
‘We were disappointed with the results, but I enjoy the opportunity to get a hands-on experience with engineering,” Hooper said.
The team struggled in keeping water from leaking throughout the contraption, and with perfecting the contraption so that it could run all the way through without human interaction, which is an integral part of the competition.
Competition aside, the event itself was noteworthy, Hooper said.
The contraptions brought by the dozens of schools were set up throughout the science center and continued over to the Sports Works complex.