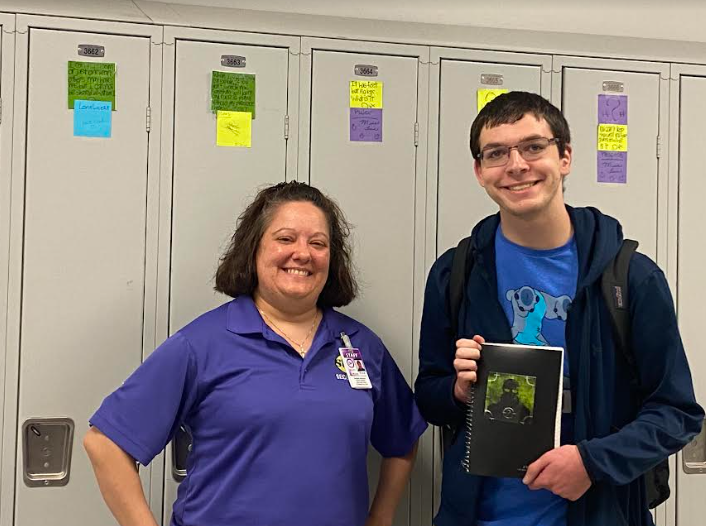 There is a new “Riddler” around school, writing riddles on Post-It notes and sticking them onto third-floor lockers.

I have an eye but cannot see. You’ll head inside when you see me. What am I?

I can only live where there is light, but I die if the light shines on me. What am I?

There is a new “Riddler” around school, writing riddles on Post-It notes and sticking them onto third-floor lockers. It turns out that this riddler is junior Jason Newman, and the person who has been answering those riddles is security guard “Miss Tina” Glinski.

Newman said he got the idea for posting the riddles because of a Batman movie.

“I was inspired by the movie Batman. The Riddler there was unique from the others. This one was serious and I found it intriguing,” Newman said.

The first riddle that Glinski found was posted at the end of February. The riddle was, “What can’t be used until broken?” The answer, as Glinski figured out, is an egg.

Newman never thought that people would answer the riddles in the first place.

“I was just expecting people to look at them and wonder ‘who is putting these up?’ and just be baffled by the question,” Newman said. “I was a little surprised someone was answering them and I am glad someone is.”

Newman said he originally posted the riddles on other floors as well, but they were taken down. On the third-floor lockers, they are still posted.

Most of the riddles he posts come from the internet.

Glinski said she’s been answering the riddles because she “thought it was fun, got my attention, and I thought, OK, why not give me something to do. And as we can see, it got out of hand,” she joked.

Newman said he’s encouraged that Glinski takes the time and effort to answer his riddles. He also feels more involved with the school by posting the riddles and the enjoyment allows him to feel more at ease here.

Glinksi is happy with that result.

“I thought I was a motivating factor in his life,” Glinski said. “I think it’s a positive experience. If I can make him feel like I motivated him, cool, I’m good.”

Glinski plans to continue answering as many riddles as she can.

“I’m going to do this until the very last day and hopefully I get the answers,” she said.

By the way, the answers to those riddles at the top of the story are first, a hurricane, and second, a shadow.