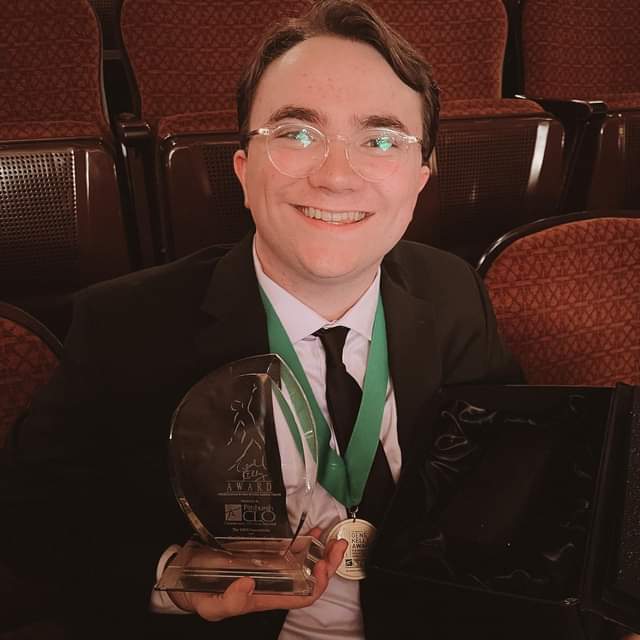 Senior Max Pratley and sophomore Kevin Hutchinson won Gene Kelly Awards this past weekend, along with Baldwin winning the Best Costume Design Award for the spring musical How to Succeed in Business Without Really Trying.

“I was really surprised and kind of in shock,” Pratley said.

Pratley played Bud Frump in the spring musical. He also had been nominated for his role as the Minstrel in last year’s Once Upon a Mattress, but this is his first year winning.

“Playing Bud Frump was just so much fun. I had a lot of funny lines and I did a lot of physical comedy, like pratfalls and spinning on the floor, which always got a big laugh from the audience,” he said.

Junior Morgan Smeal said she was overwhelmed with emotion when Prately won.

“I was so excited,” she said. “Once he started giving his speech, it finally set in. I cried four times throughout the entire speech. He’s a very good person and I’m so happy he won.”

Pratley said he was very close to his fellow cast members and they had a lot of fun together while performing.

Hutchinson, who won the Kelly Critics writing award for reviewing other schools’ musicals, said participating in the program was a good experience.

Hutchinson reviewed three musicals that were put on by other high schools. The reviews were posted on the Post-Gazette website.

He is the third Purbalite staff member who has won the Kelly Critics Award in the program’s history.

“This really helped improve my focus and skills, as I had to have my full focus on what was going on,” he said of watching each musical. “My mind tends to wander around, so this was like a push back to reality, because if I lost my focus, then I would have nothing to write about.”

Smeal was impressed by Hutchinson’s victory as well.

“We had these wonderful costumes that were both period accurate but also colorful and fun,” Pratley said.