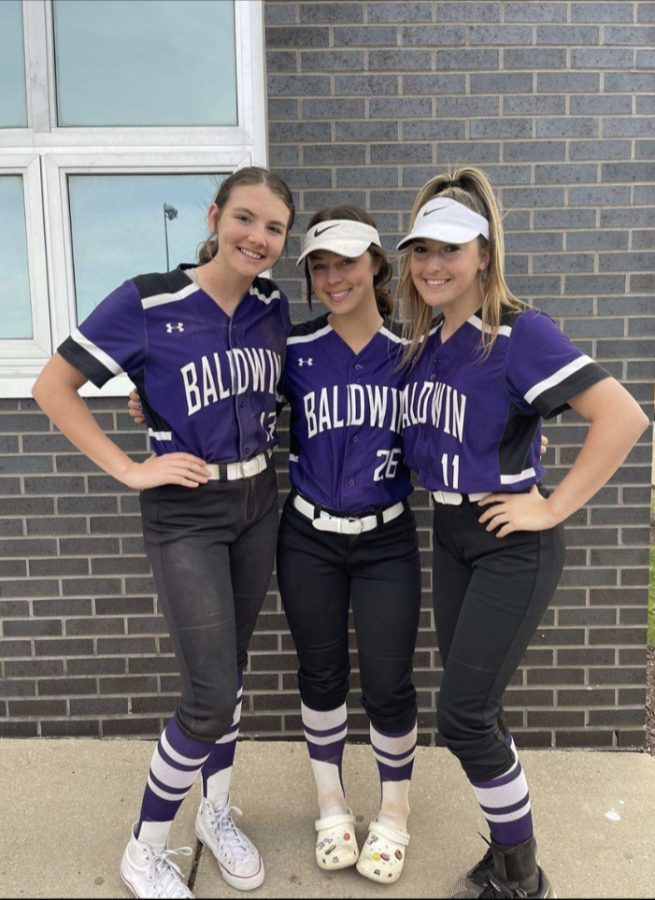 Last year, Gabby Jaquay found herself struggling to push forward because of an injury that caused her to miss an entire softball season.

“When I broke my foot, I was out for a whole season and I didn’t know how it was going to be when I came back. I had to pull through it, and hoped that everything would turn out well,” Jaquay, a freshman, said.

Jaquay did, and this season she has had a regular spot in the lineup on the varsity team along with two other freshmen – second baseman Ryley Shaw and right fielder Kaylee Smolko.

“I feel like all the hard work that I’ve put in for the last few years has started paying off. I’m very proud of myself for making it and doing well,” Jaquay said.

Shaw and Smolko have faced challenges over the years as well.

“Sometimes when I would strike out, I would get angry and second guess myself if I really wanted to play. But I always found the drive to continue because of how fun I thought it was.” Smolko said.

As much as she enjoys the sport, Shaw agrees that it can get overwhelming.

“I think that the mental health aspect of it is not talked about enough and it should be paid attention to. Sometimes you do feel like you want to quit, but I persevered and pushed through it,” Shaw said.

The girls have played softball since elementary school, and Jaquay and Shaw have been teammates since they were 5 years old. All three also play other sports: Jaquay plays on the girls basketball team, Shaw plays soccer for the school, and Smolko plays volleyball.

“It’s really nice to see how successful we’ve become,” Shaw said. “It feels good (to be on varsity)  because of all the hard work we’ve put in over the years.”

That success is due to a lot of hard work.

Jaquay’s family has helped her practice softball over the years, especially her sister, Selena Jaquay, a college sophomore who plays at California University of Pennsylvania.

“Both of my parents played baseball and softball and decided to put me into it. My older sister and I would play in the back yard sometimes,” Jaquay said.

Smolko found motivation from working with her dad as her coach on her travel team.

“He’s my kind of my support person, which is really important to me,” Smolko said.

Shaw was influenced to play softball by her mom.

“My mom put me in softball and always wanted me to be an athlete,” Shaw said.

Their hard work has been recognized by older teammates, such as sophomore Anna Schumacher.

“I think they’ve all stepped up pretty well because we’re a younger team,” Schumacher said. “I think it’s good that they’re on varsity. They do a good job at helping the team.”