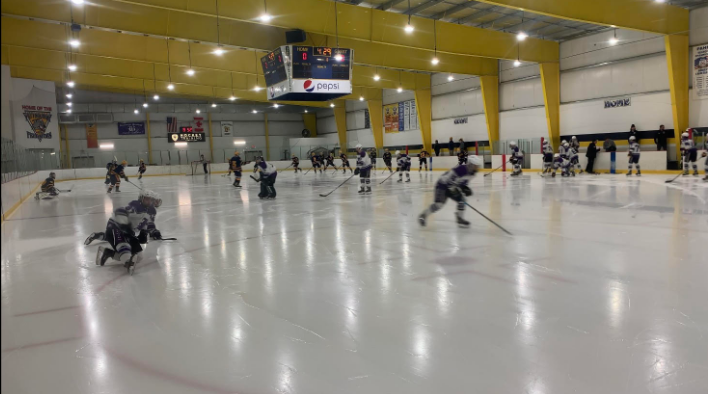 After dropping their two most recent games to North Allegheny and Pine-Richland, the Highlanders see the competitiveness in the AAA division but are looking to bounce back and climb in the standings.

After dropping their two most recent ice hockey games to North Allegheny and Pine-Richland, the Highlanders see the competitiveness in the AAA division but are looking to bounce back and climb in the standings.

For the last two years, the Highlanders mainly dominated the lower-level AA division. This year they moved up to AAA and have picked up five wins. But the top AAA teams have proven to be more of a challenge.

Sophomore Tanner Plinta feels that the team really needs to get more focused going into big games against top teams.

“It is a wake up call,” Plinta said of the recent losses. “Our plan is still the same goal as it was at the beginning of the year. … It just means we have to focus more going into big games.”

“Losing those big games really can affect us,” Belak said. “We really need to focus on winning some of these bigger games throughout the year.”

The Highlanders have earned 13 points in 10 games played so far this season. Their defense for the most part during the season has been very solid, but Baldwin has produced only 26 goals.

Belak praised the team defense, but acknowledged that it would make a big difference if the Highlanders could capitalize a little more on their offensive opportunities.

“We need to pick up our offensive play and keep our defense playing well. Also, we have to bring ourselves back together after losing two in a row against two good teams and work extra hard to get back to winning again.”

“NA and Pine-Richland are two very good hockey teams and good competition for us. We plan to go into every game like they’re the best team in our division no matter who we are up against that night,” Belak said.

Senior Carson Kress said the team has plenty of talent.

“Nothing is going wrong. We just need to get back into the groove of things,” Kress said.

Several players, meanwhile, have made big strides already this year. Plinta said that junior Joey Stanick has begun to take a leadership role on the team.

“Joey has really stepped up his game and is playing really well,” he said.

“He does his job and never complains. He supported our team when we won states (last year), and this year he is scoring goals and moving and playing a better game,” Aul said.

Looking toward the second half of the season, Aul said the goal remains to earn another championship.

“I think we have a good shot at doing it again this season,” Aul said.