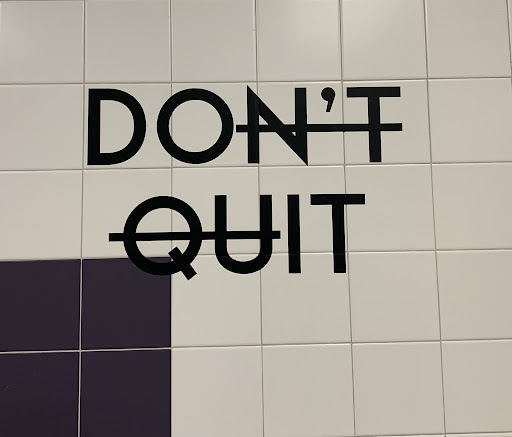 Motivational quotes have been posted all around the third floor.

High school students who have classes on the third floor likely have noticed the motivational quotes that have been posted on the walls.

Middle school Assistant Principals Denise Wells and Jon Peebles came up with the idea for posting the sayings back in July.

“The purpose was to motivate kids, get them excited, and to change their mindset because words matter,” Peebles said.

As kids get older, the mindset that they can be anything they want to be diminishes, Peebles said. Because many of the school walls are bare and too sterile for his liking, Peebles said he wanted to add something that not only looks interesting but also motivates students.

“It spirals. You get one little idea and as a community, it turns into a big thing,” Peebles said.

“I’m a former Baldwin student and I wanted to bring back some school spirit,” Wells said.

With this in mind, the middle school assistant principals ordered packs of inspirational stencils that could be posted on the hallway walls. Initially, it was just Wells and Peebles working together on the project, but then several middle school teachers jumped in and helped out, Peebles said.

“It’s nice to be in a positive environment where we know the school cares,” Walker-Herr said.