Spozarski steps out of comfort zone to fill mascot shoes 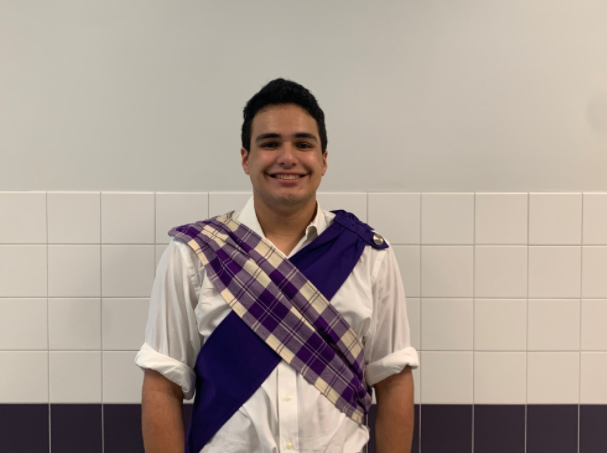 Senior Ethan Spozarski, known for his excitement and enthusiasm all around the school, is the new Highlander mascot.

Wanting to end his high school years on a high note, senior Ethan Spozarski has taken on the role of being the new Highlander, the mascot for Baldwin High School.

Spozarski, known for his excitement and enthusiasm all around the school, wanted to make memories for his senior year, along with pushing his own boundaries. He said he was nervous to put on the Highlander outfit, citing bullying in his younger years as a source of anxiety.

“I was bullied a lot when I was younger, so this is definitely stepping out of my comfort zone,” Spozarski said. “I am very nervous and terrified for (students’) reaction.”

Though he is apprehensive about the role, Spozarski was inspired by Class of 2021 graduate Dylan Farabaugh, whom he saw wearing the Highlander outfit last school year.

Spozarski talked to Farabaugh before the school year ended, inquiring about how to represent the school as a mascot. Then during the summer, Spozarski was named the mascot and got the outfit from Athletic Coordinator John Saras.

Spozarski wore the mascot outfit to school today for the first time while staffing the spirit cart with the cheerleaders and some of the football players. They handed out necklaces, noisemakers, and candy, promoting tonight’s football game, where Spozarski will make his first Highlander appearance at a sporting event.

“It went pretty well. I got a lot of laughs and encouragement. There was no negativity,” Spozarski said.

Special Olympics co-sponsor Eric Jankoski, who has worked with Spozarski in the Special Olympics and Best Buddies programs, said the senior is a perfect fit for the Highlander role.

“Ethan is one of the most energetic, upbeat, positive people I’ve ever come across. If there was a mascot persona, it would be him,” Jankoski said. “He is always in a good mood and would be perfect for our fans.”

Jankoski also cited Spozarski’s participation in extracurricular activities, which include his role as a Purbalite sports editor, as well as his good grades, saying that those make him a great representation of the Baldwin-Whitehall School District.

Saras said Spozarski’s personality and overall attitude make him a great fit for the mascot role.

“With Ethan’s personality, we hope he will also be at events that happen throughout the community,” Saras said.

Due to the pandemic, tryouts were not held for the Highlander role this year. But Saras said that as soon as Spozarski showed interest, he knew that the perfect mascot had been found.

“He has a passion for high school athletics and a desire to uphold the Fighting Highlander spirit,” Saras said.

Spozarski is excited to give it his all throughout this school year.

“I am excited to be on the field and be involved with the football team. I am nervous for the reactions, but I am going to embrace it and turn it into positive energy,” Spozarski said.