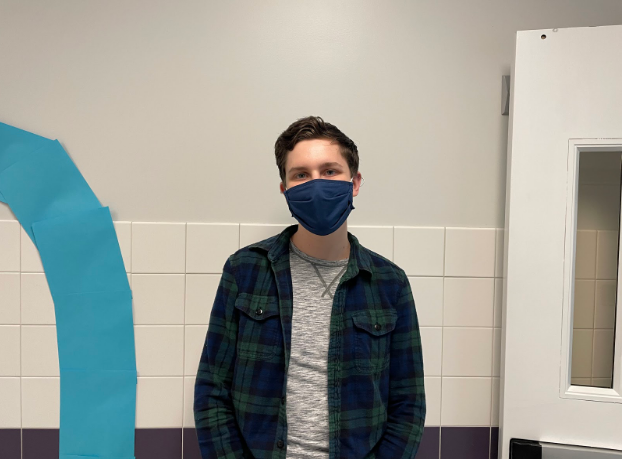 Aidan Greenaway becomes a finalist for the National Merit Scholarship.

After a day busy with his five Advanced Placement classes and extracurricular activities, Aidan Greenaway arrives home — and gets to start on his homework.

But this Baldwin senior’s hard work and long hours are being recognized: Greenaway was recently announced to be a finalist for the National Merit Scholarship, which is a nationwide competition that recognizes students for their academic achievements.

All of the juniors who take the PSAT test are eligible for the scholarship. Of those 1.5 million students, only 16,000 are chosen to be semifinalists and then 15,000 become finalists.

“There are various levels of the National Merit Scholarship program, including commended, semifinalist, and finalist tiers. Once students make it to the finalist group, they are in the running to win the scholarship,” counselor Bethany Lash said in an email.

Greenaway first advanced to become a semifinalist through his PSAT score, which he credits to the preparation he got at Baldwin.

“I think just taking tests at Baldwin helps with time management and staying calm and focused. I think that’s a big deal for success on time-based tests like the PSATs and AP tests,” Greenaway said.

He then had to complete an application process, including writing an essay and listing his extracurricular activities, to become a finalist for the scholarship. Receiving the letter in the mail with the news that he was a finalist was an exciting moment, he said.

Baldwin Principal Shaun Tomaszewski understands the level of dedication required to accomplish such a feat and applauds Greenaway for his level of commitment.

“Aidan is the type of student who is able to do whatever it takes to succeed academically, and that is a characteristic that oftentimes does not appear in students until they reach graduate school,” Tomaszewski said.

In addition to being a finalist for the National Merit Scholarship, Greenaway also hopes that his hard work will allow him to attend his dream school, Johns Hopkins University. He has had an interest in the school since the end of his sophomore year and hopes to be able to study medicine.

On top of his academics, Greenaway also balances activities such as being in marching band, Baldwinaires, participating in the musical, and working a part-time job.

Tomaszewski is impressed by the variety of extracurriculars that Greenaway is able to focus on outside of his academic endeavors.

“What impresses me most about Aidan is the breadth of activities in which he engages,” Tomasweski said. “He enjoys doing other things outside of being laser focused on his academic performance.”