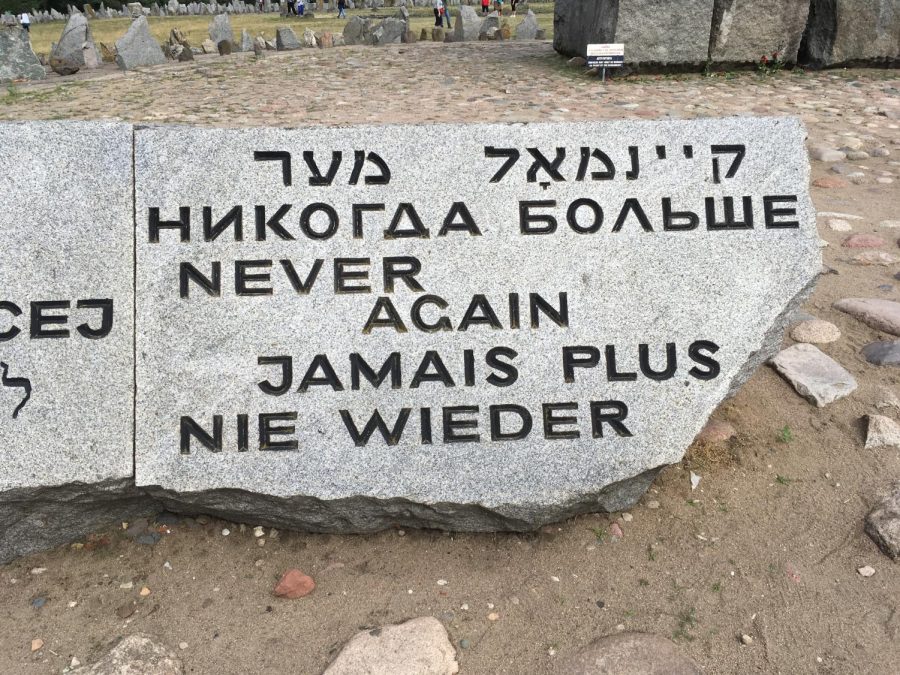 A holocaust survivor spoke to eighth grade students about her experiences as a child.

Holocaust survivor Ruth Drescher still remembers a small incident with her friends when she was a child.

“I lived in the city of Stuttgart, Germany, in an apartment building. I would play with all the other children in the apartment courtyard,” Drescher said. “One day one of the mothers came out with candy for all of the kids. Every child got two pieces of candy, except for me.”

Drescher only received one and asked her friend why.

“‘Well, that’s because you’re Jewish,’” she said. “This moment is especially memorable to me because it is the first time I realized I was different from the other children.”

Not long afterward, Drescher and her family had to flee Germany for America.

On Tuesday she talked to English teacher Dan Shaner’s students.

Despite having to leave her home in Germany and flee to America, Drescher said she did not suffer as much as others affected by the Holocaust.

“My experience was very sobering, even though I didn’t suffer as much as others,” Drescher said. “I believe it made me more sympathetic to the difficulties in other people’s lives.”

Drescher’s hope for the world today is that society as a whole can feel free.

“I want a society where you don’t have to be worried about having someone knock on your door in the middle of the night, and having to suddenly move your family to another country,” Drescher said.

Shaner said he strives to teach his students about the history of human injustices, to educate them on the repetition of history.

The students asked Drescher questions concerning her experience in Germany and after her move to America.

Eighth-grader Kaylee Smolko said it was an important event for students.

“I’m honored to have had this opportunity,” Smolko said.

“This opportunity opened up a lot more ideas about the Holocaust when considering her experiences. It was super cool to listen and hear her account,” Smolko said. “Our most recent (paper) was on how Anne Frank managed to keep hope, even though she knew her next day could very well be her last.”

Drescher also shared with the students her life as a young Jewish immigrant in America. Drescher said that she wanted nothing more than to be an American teenager straight out of Seventeen Magazine.

“I felt that my family and I were part of an outsider group, and I wanted so much that to be an insider,” Drescher said. “I wanted to be an all-American teenager, so I became a cheerleader.”

Drescher lives in Pittsburgh now and has been involved with the development of many programs that educate about the Holocaust.

“It gives me joy to see how many people come to the center and learn of the Holocaust,” Drescher said. “It’s important to educate about the Holocaust as children. There is still a significant number of people who can never forget the horrors of mankind’s history that they witnessed through government’s cruelty.”

“Human memory is short and we tend to repeat the past and repeat the mistakes of the past more often than we repeat the good. That’s nobody’s fault that it happens, but it does,” Shaner said.