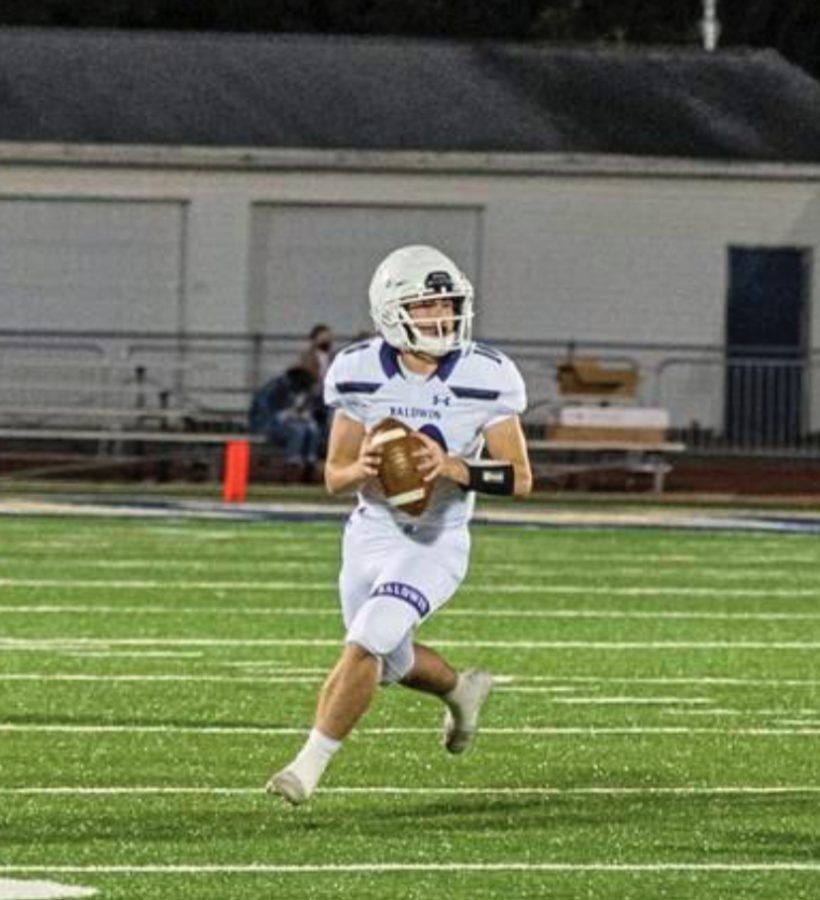 Senior Colton Brain has excelled in both the classroom and on the field.

Brain is not only the starting quarterback for the football team, but he is also a straight-A student with pre-med aspirations after his final year at Baldwin.

“The time management can be hard at times, but I care a lot about both sports and school, so I make it work,” Brain said.

Brain has been combining school with his love for football since he was 7 years old.

“I knew right away that (football) was something that I wanted to pursue and be good at,” Brain said. “I’ve had a lot of great coaches and teammates who dedicated their time to help me, which I will always appreciate.”

Brain stands 5 feet, 9 inches tall, making him undersized for his position. That has required him to make up for his smaller stature with skill and a strong mindset.

It has paid off. Despite the fact that Baldwin has only played four games this season, due to a COVID-19 quarantine, Brain has more passing yards than any other 6A quarterback going into tonight’s game.

“I’ve been told my entire life that I was too small to play quarterback,” Brain said. “I heard plenty of student sections yelling jokes at me during our games last year, which I thought was pretty funny.”

Brain said that to succeed in such a competitive setting, an athlete has to be able to ignore the trash talk or use it as motivation to do better..

One of Brain’s favorite moments of his career happened during the team’s win against Hempfield, during the fourth quarter.

“We were up by 10 points, but they scored and got a lot of momentum,” Brain said. “We answered with a long sustained drive to score again and secure the win.”

Brain said that drive showed the team’s ability to bounce back from adversity.

Assistant Coach Christopher Reilsono said Brain is a big reason that the team is able to persevere through tough times.

“Colton is the rare athlete whose `never quit’ attitude elevates everyone he associates with,” Reilsono said. “He’s a warrior on the field, and a true role model off of it.”

Reilsono said he believes Brain will achieve whatever goals he wants to pursue after high school.

“He’s been a source of pride for both myself and the Fighting Highlander football program, and I am excited to see all he will go on to accomplish after he leaves our walls,” Reilsono said.

Reilsono, who has both taught and coached Brain during his years at the high school, commended his commitment both in and out of school.

“I couldn’t be prouder of him, both as a teacher and a coach,” Reilsono said. “It was a true honor to see him prosper these last four years.”

“Colton is one of the fiercest competitors I’ve ever seen at Baldwin,” Simcho said, “This kid wants to win badly, and he doesn’t care who gets the credit.”

Simcho said Brain is able to get past mistakes quickly, and puts in hard work every day.

“He strives to be a great `practice player’ because he knows that you will play like you practice,” Simcho said. “His leadership is evident Monday through Saturday, not just on Friday nights.”

Senior Connor Lavelle said Brain has been a constant force on the team this year.

“He’s had a lot of key moments and plays this year. He’s been able to lead us down the field and keep us in games all year,” Lavelle said.

“I believe size doesn’t matter in football. It’s heart over height,” he said.