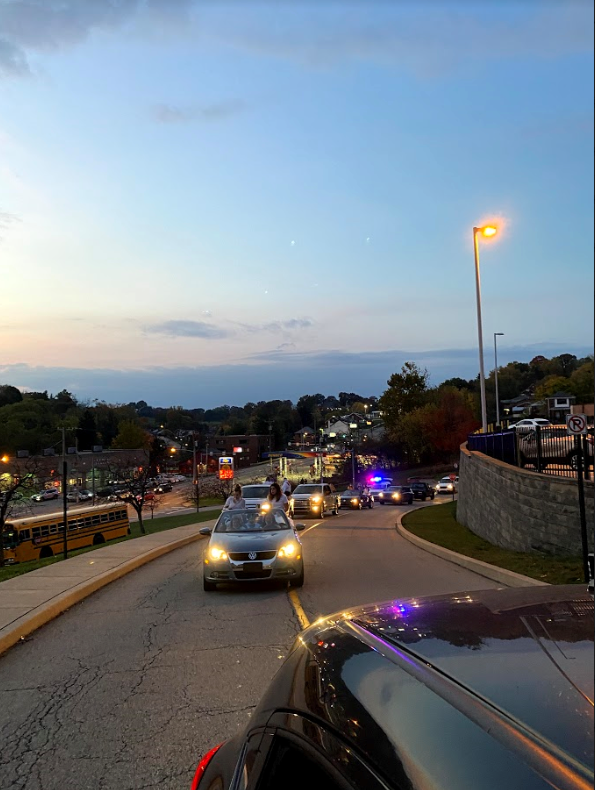 The homecoming parade makes its way up to Baldwin High School.

With the homecoming carnival and dance canceled due to COVID-19, senior Abdullah Makhoul said he didn’t know what to expect for this homecoming season.

But on Wednesday night, senior athletes, the marching band, cheerleaders, and homecoming court participated in Baldwin’s first homecoming parade around the school to share school spirit for homecoming week.

“We didn’t know if we would even get a chance to be recognized as a homecoming court because of everything going on this year,” Makhoul said. “This parade is a great alternative and it turned out better than anyone could’ve expected.”

The seniors involved were encouraged to dress up in costumes and decorate their cars. The senior cheer team was excited for the parade and looked forward to sharing their costumes.

“We went all out on the ’70s theme for this parade,” senior Julia Stipetic said beforehand. “We’re super excited and I think this parade will be totally groovy.”

The marching band led the parade, followed by senior athletes and the homecoming court in their decorated vehicles.

Spectators watched the parade kick off in the student lot, then moved down to the field for homecoming court recognition.

“I think it’s really cool to have an event like this when so many other things had to be canceled,” senior Kristin Yunk said. “It’s good to have some sense of normalcy in such a crazy year.”

Senior marching band member Anna Abbiatici was glad to have another chance to perform with the band.

“I honestly didn’t think we’d have a ton of performances this year,” Abbiatici said. “The parade was super fun and I’m happy we got the chance to be in front of an audience one more time for my senior year.”

Senior marching band member Trisha Miller was also excited by the opportunity, and felt it was a fun way to make up for the lack of football games.

“I was kind of disappointed by how we only have two home games, so this was a cool way to make up for it. Plus the costumes added some extra fun,” Miller said.