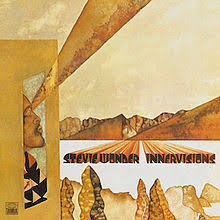 Throughout the late 1960s and early 1970s, Stevie Wonder heavily influenced the music industry with his Motown style of music.

Wonder specifically shared his unique writing style on his 1973 hit album, Innervisions. Wonder posed Innervisions as a concept album, challenging mainstream pop artists with the use of an R&B style as well as with political messages in the lyrics.

This album shows the true musical talent and complexity of Wonder, for while many of his earlier albums consisted of romantic ballads, Innervisions shows the upbeat and political side of his music.

For this album, Wonder also became one of the first musicians to use an ARP synthesizer, influencing the sound of commercial soul music.

As for the messages in Wonder’s songs, “Too High” talks about the abuse of drugs, and he pairs that message with harmonicas, synthesizers, and jazz-type beats that give the song a disorienting feeling.

In “Living For The City,” Wonder calls out the systemic racism in police departments. He talks about the fears that the black community has to deal with every day. He includes the sounds of police sirens as well as dialogue between a seemingly innocent black man and a police officer who is arresting him.

Overall, the album was revolutionary both within the music industry and society. While Wonder influenced pop sounds by testing musical boundaries, he also called out many of the societal issues people have been facing for years.