Netflix series `Dead to Me’ returns with more suspense, friendship 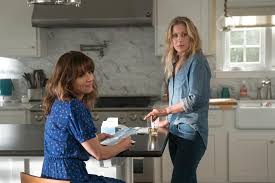 The Netflix series "Dead to Me" maintains its suspense in season two.

The Netflix series Dead to Me is back with its second season, featuring more unexpected twists in the plot.

Season one begins with recent widow Jen, played by Christina Applegate, grieving the loss of her husband, who was killed in a hit and run. Jen becomes obsessed with finding who did it.

At a support group, she meets Judy (Linda Cardellini), who is grieving a tragic loss of her own.  Despite their opposite personalities, they become the best of friends and go through life helping each other more than they both know.

Although their relationship is built only on lies, they both want the best for each other and always look past the flaws of the other. They become bonded together through tragedy and realize they need each other more than the truth.

At the end of season one, some truth is revealed about Judy, and Jen thinks she will never forgive her. But when Judy suffers a loss that becomes Jen’s fault, she realizes they both have done wrong.

In season two, Jen and Judy are back together as friends and deal with the problem Jen has created.

Season two does a good job of going into depth about Jen’s two kids, Henry and Jackson. The audience gets a look into how the kids are dealing with the loss of their father as well as the new strange friend their mom has.

Both the kids end up bonding with Judy and develop a love for her as she helps and gives them advice their mom can’t.

Season two also brings back characters from the past who have Jen and Judy questioning everything.

The friendship that forms between Judy and Jen is strange, but the audience somehow still grows to love this duo and roots for them to stay friends.

Both seasons have the right balance of heartbreaking tragedy and comedic relief.

Overall, the show continues to leave the audience in suspense and wanting to see what challenges will arise next for Judy, Jen, and their friendship.