Tiger King: Murder, Mayhem and Madness has taken over Netflix 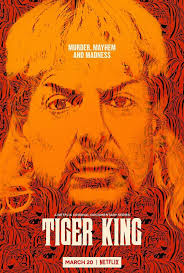 Tiger King: Murder, Mayhem, and Madness has taken over Netflix during the quarantine.

In the craziness that has become the self-quarantine state of stopping the spread of the coronavirus, Netflix has released the docu-series Tiger King: Murder, Mayhem and Madness, which has showcased crazy on a whole different level.

The documentary focuses on the small but connected community of big-cat enthusiasts and owners of exotic animals. Throughout the documentary, several strange and shady characters emerge from the woodwork, but the two who really matter to the series are Joe Maldonado-Passage and Carole Baskin.

Maldonado-Passage, better known as Joe Exotic, is an Oklahoma zoo owner who describes himself as the most prolific breeder of tigers in the United States, and who has nearly 200 tigers on his 40-acre property in Oklahoma. Baskin is the owner of Big Cat Rescue in Tampa, and she makes it her personal mission to end the practices of Joe Exotic.

Throughout the doc, dirt is dug up on nearly every person who appears on screen. Baskin is exploited in the series over the mysterious disappearance of her husband, Don Lewis, in 1997, with many participants accusing her of murdering him and feeding him to one of their tigers. Joe Exotic uses this story as fuel for the fire of their feud, as he produces internet videos on his YouTube channel and openly shares his feelings about Baskin, even saying he wishes she were dead. Joe goes on to use that murder theory in one of his several music videos, depicting a Baskin lookalike feeding meat to one of his tigers.

Crazy is the perfect word to describe the series. From the stories of alleged murders to the cult-like behavior induced by big cats, the focus often becomes blurred.

Nonetheless, it has been received very well by critics and fans alike, and has become the must-see documentary during the quarantine. There are times where it is comedic, watching these larger-than-life characters engage with and live near these incredibly dangerous animals.

It could certainly be argued that the doc would not have done as well were it not for the quarantine. But this story is so unique, crazy, and fascinating that people likely would have found themselves glued to the series either way.

Something that is not being talked about nearly enough, however, is the treatment and exhibition of these rare and beautiful animals.

The viewers are locked to their screens with the crazy storylines and off-the-wall interactions between these people. But one person in the doc, Joshua Dial, says it best near the end of the last episode, when he states that it is a shame that the real issue is not being addressed: the preservation of big cats and other exotic animals in the wild.

With all the money being generated from this doc, from the participants’ zoos and from their lawsuits, certainly some of that could go a long way in helping conservation of tigers in their natural habitat. The statistics related to tigers living in the wild and living in cages is shocking and sad, with nearly 5,000 tigers living in captivity in the United States.

Tiger King is absolutely a must see for anyone interested in true crime documentaries. While the focus is often blurred, and storylines seem to be copy-and-pasted in some areas, it does remain incredibly interesting. With that being said, the real issue of conservation is not pushed enough in this documentary.