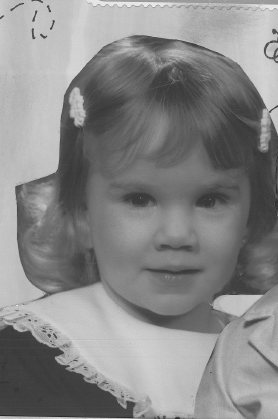 This photo is of Mrs. Krystal Schulte, English teacher, as a child.

If you were granted three wishes, what would they be?

I want to be able to read minds, have an extra five hours every day, and have a “rewind” button.

What’s your zodiac sign and does it apply to you?

Libra. We value balance, fairness, organization, and pretty things, so it applies to me.

When people don’t use the Oxford comma.

If you couldn’t be a teacher, what would you be?

What’s a skill you wish you had?

I wish I was better at getting somewhere without getting lost.

What was the first job you ever had?

Handel’s Ice Cream, and I loved it there.

What’s the weirdest dream you’ve ever had?

It was when dinosaurs were chasing after me, because I’m afraid of dinosaurs.

Do you have any special or unusual talents?

I used to be able to pole vault, but I couldn’t do it today.

If you could get rid of any invention in history, which would it be?

What’s your lucky number, and why?

It’s four because it was my number playing softball.

What’s a song you would use to describe yourself?

“Crystal Blue Persuasion” by Tommy James & the Shondells. I was named after it.

What’s your favorite book to teach?

1984 by George Orwell, because it is so relevant to the idea of government control.