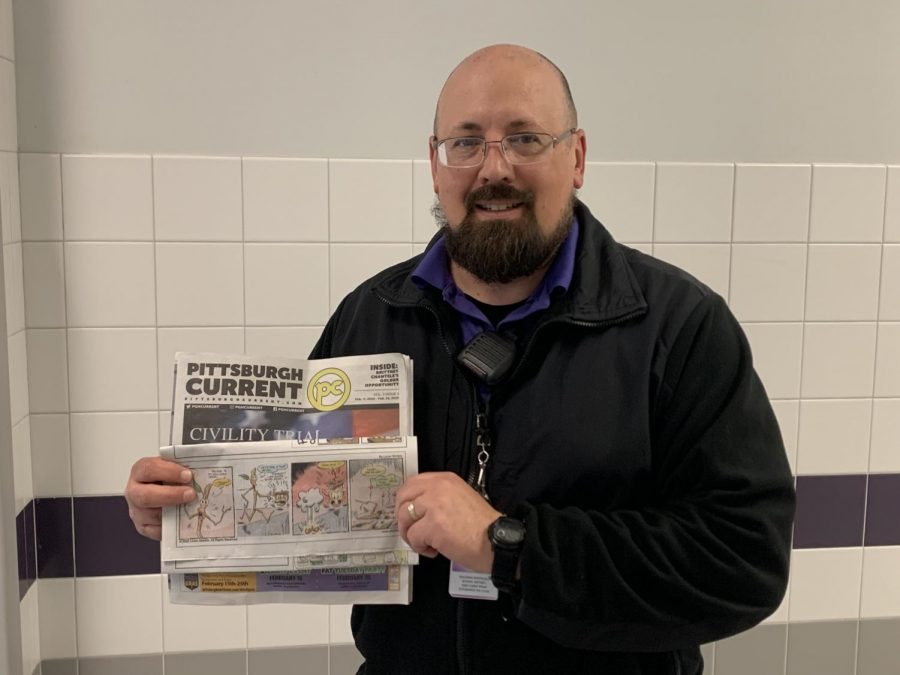 Chief of Security Loran Skinkis is also an artist, and the Pittsburgh Current recently published one of his comics.

Just as superheroes have secret identities, Chief of Security Loran Skinkis has a life outside of Baldwin’s hallways: He is a cartoonist.

Skinkis has been a graphic designer for almost 25 years, and he has created many illustrations and comics. His most recent creation, a comic strip called “Twiggy,” has just been published by the Pittsburgh Current, an alternative weekly newspaper.

The Pittsburgh Current opportunity arose because of a friend.

“A friend of mine knew the publisher,” Skinkis said. “So I got in contact with him about my art being in the paper.”

Eventually the publisher asked for some of his pieces and ran “Twiggy” a few days later.

“I had been trying for so long, and then one day it was just in the paper,” Skinkis said.

The new comic is a short comedic bit about a twig named Twiggy. Twiggy introduces the audience to the comic strip and then falls off a cliff. The comic pans to Twiggy and he says, “I think I broke something.”

His web page, skinkis.com, showcases both his work in comics and his advertising art, illustrations and T-shirt designs, among other art projects.

Starting out, Skinkis was a self-taught artist. After serving in the Marine Corps during the first Gulf War in 1991, he took classes at Community College of Allegheny County.

While there, he created all of the strips on the comics page of the school newspaper, which led to a big feature story in the Post-Gazette written by local comics expert Tony Norman.

Skinkis’ biggest goal at the moment would be to be a regular illustrator for a newspaper. His biggest dream, however, would be to work on a nationally known comic and gain a national following.

Among established comic books and comic strips, Skinkis has a few favorites.

“Superman and Spider-Man have to be among my top favorites,” Skinkis said.

Skinkis also enjoys the “Nancy” comic strip, created by Ernie Bushmiller, which has been in papers since 1938.

“I just love his style.” Skinkis said. “His art is very simple and uses rather bizarre humor for his time.”

Art teacher Cheryl Foote is familiar with some of Skinkis’ work and admires the emotion he puts into his art.

“Of the pieces I’ve seen, his dynamic is very expressive and he has a lot of power behind each image, which I truly admire and appreciate,” Foote said

Foote also admires how Skinkis has incorporated art into his life despite having a full-time job.

“I think it’s very exciting that he is able to have a steady income and still do his art professionally,” Foote said. “A lot of times with art, your income is based on commision and when that happens — when you’re drawing for a living — your art loses a lot of that passion.”

Skinkis helps keep Baldwin’s hallways safe during the day for a living, but maintains his passion for art.

“It’s a nice outlet, whether I’m getting paid for it or not,” he said.