Freshman wrestles to make his mark 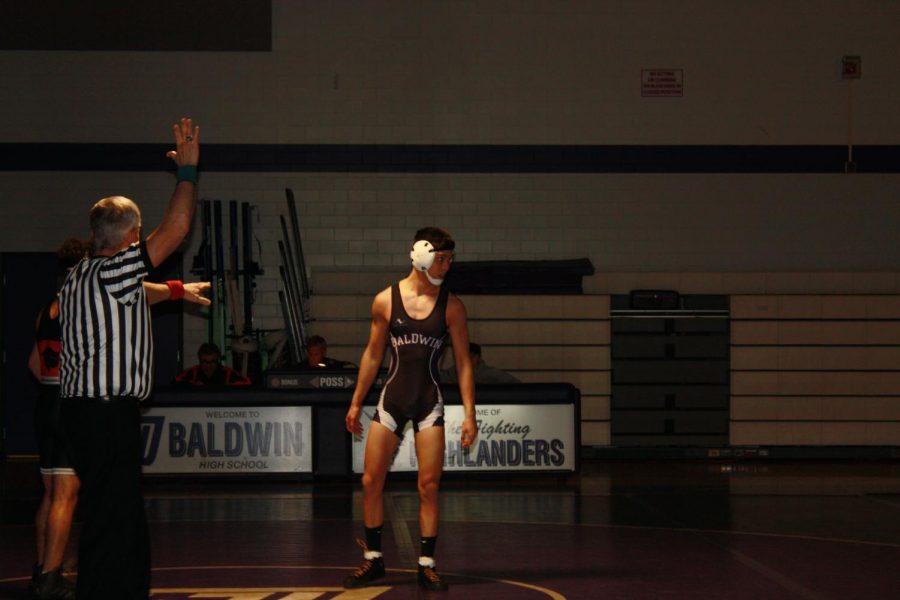 Freshmen John Starusko makes his mark on the wrestling stage.

A freshman wrestler often has to work through some losses and slowly try to create a name for himself.
Freshman John Starusko, though, has won his share of matches this season.

He also got a head start on establishing himself last year, when he qualified for junior high states as an eighth-grader.

“It was a great experience. For only being new to the sport, it was crazy to go and see all of these very good wrestlers,” Starusko said.

Starusko was introduced to the sport thanks to a friend in seventh grade.

“I didn’t really have any interest in wrestling before because I did not know much about it,” Starusko said. “My first year I just wasn’t a naturally good wrestler, but I started wrestling year-round for a club team, and that’s when I became a better wrestler.”

Starusko feels that a lot of his success is due to his hard work and his ability to listen to coaches and then fix his mistakes.

“I have been pretty good in my matches so far, but I am still getting better and adjusting to the high school competition,” Starusko said.

Sophomore teammate Nariman Niyazov feels he has the potential to be one of the best wrestlers this program has seen by his senior year.

“You can tell he pushes himself a lot more,” Niyazov said. “You can see he just wants it more.”

Starusko has become a well rounded wrestler, but where he excels is his ability to scramble, which allows him to get out of holds, stay calm, and regroup, Niyazov said.

“It pays to be able to get tough situations. Since a lot of upperclassmen have more experience, they come out fast and try to use this against you,” he said.

As a team, Baldwin wrestling has not been that successful over the past years, but individually the program has seen some of the state’s best wrestlers .

“It’s hard (for the team) to win since we don’t have enough people to cover all the weights,” Niyazov said. “Other teams look at us as being small and weak, but I feel this only motivates us cause we are like the underdogs.”

Other standouts for this season include junior Justin Bochter, and sophomores Dom Vano and Isaiah Siwik.