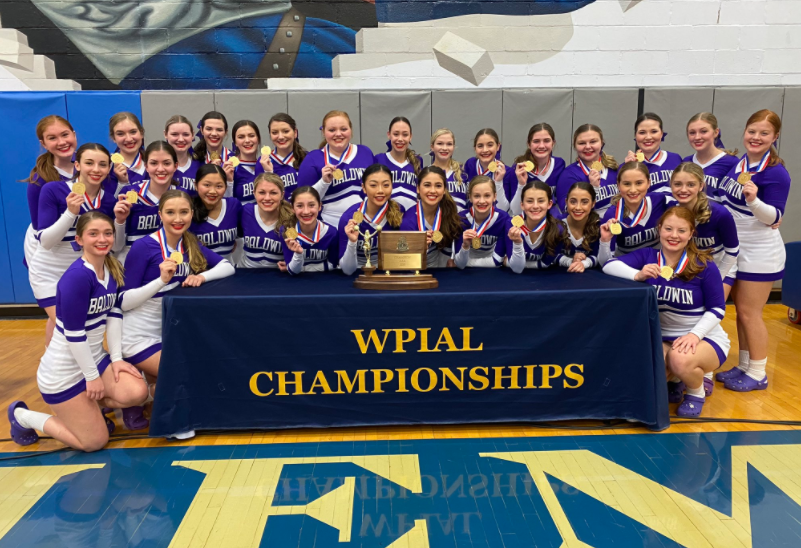 The competitive cheer team won the WPIAL Championships for the first time ever on Saturday.

As soon as she saw her coaches crying and the crowd screaming, senior Abby Zuder knew that her cheer team’s routine at Saturday’s WPIAL Championships was something special.

“In your own stunt groups, you can’t see the rest of the team, but I could just feel the energy that we hit,” Zuder said.

That feeling was right, as Baldwin’s competition cheer team won the WPIAL Championship for the first time in school history. With it will come the honor of receiving a banner in the gymnasium.

When the time came to announce the AAA WPIAL winners, Baldwin’s team members anxiously awaited, knowing they had performed a remarkable routine.

The intensity of the moment soared when Pine-Richland was announced as the runner-up, Zuder said.

“We all really wanted to believe that we got first, but didn’t want to get our hopes up,” Zuder said. “When we found out we won, everyone was so happy and started crying. I’ve never had a feeling like that, and as a senior, it was so rewarding.”

“Winning WPIALs shows how far we’ve grown. Freshman year we never even thought of winning WPIALs,” Zuder said. “This was the first year we actually thought we had a chance of winning.”

Taryn Madden, one of the team’s two coaches, was overwhelmed with emotion as her team made history.

“I just cried tears of happiness and joy, because they have worked so hard,” Madden said. “It felt very vindicating.”

Two years ago, Baldwin was the runner-up in WPIALs, and last year the team placed third in its division at nationals.

“I’ve competed here for 12 seasons and the goal every year is to be better than the last,” Madden said.

Baldwin also earned the highest score among all 33 participating schools on Saturday, including the AA and A schools.

“Freshman year we just wanted to qualify for states. Winning WPIALs was never our initial goal, which makes this much more exciting,” Young said.

While the experienced seniors were a large part of the team’s success, many of the team’s underclassmen, including sophomore Ryan Bigley and freshman Samantha Davis, played a pivotal role as well.

“We put a lot of trust into Sammy and she pulled it off,” Young said.

The cheerleaders also credited their coaches, Madden and Dena Mihalsky, for the success this season.

“Over Christmas break, we practiced for four days in the morning,” Young said. “The coaches never had a negative attitude. They knew what we needed to do.”

“I really believe that all of the work we put in over break was a huge portion of our success,” Bigley said. “Our coaches have been telling us since the beginning of the season that we had tremendous potential, and getting first place really made us finally believe them.”

Athletic Director John Saras said he was proud of the team.

“The excitement and the way these ladies work and the support they give to all the athletic programs shows, and that’s why they’re winners,” Saras said.

“The season is really starting to go upward after this win and we have so much confidence in each other,” Bigley said.

“This win was a big confidence booster,” Young said. “We knew we had a routine that could win, but we never put all the pieces together before.”