Students lock up their phones to help needy kids 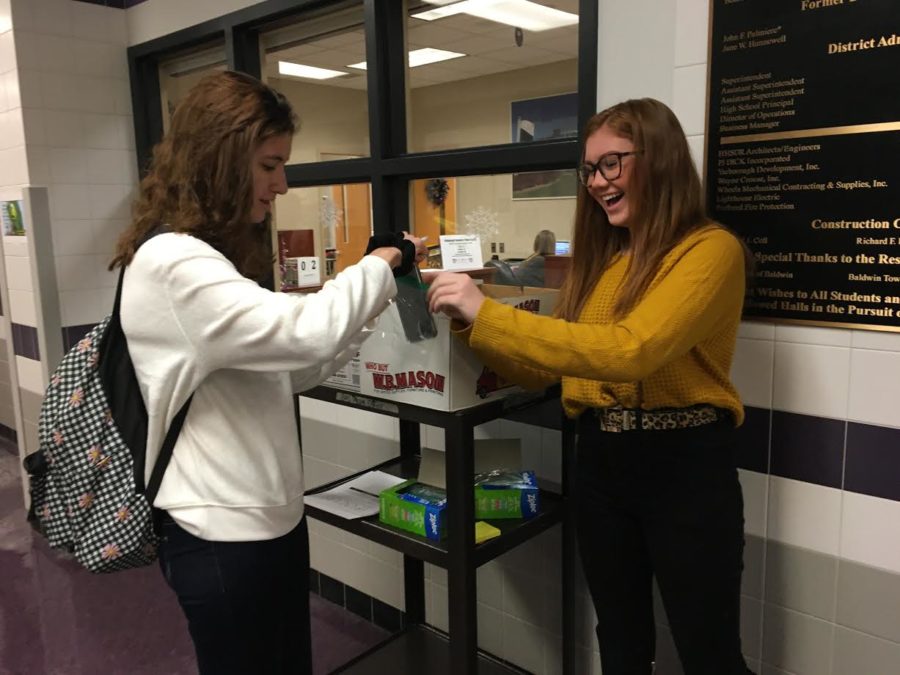 Gillian Geyer and Avery Pasquale package up cell phones for the day. About 40 students participated in the iFocus, or "no phone" day, event to benefit Toys For Tots today.

Teachers and students alike are aware that phones can be a distraction in class, but during a recent class discussion, sophomore class President Nick Petrilli and history teacher Christopher Reilsono decided to make a change.

“One day in AP World, Mr. R was having a discussion after a fire drill. He was talking about how phones take over our lives. I talked to him, and we decided to make a day to get away from it,” Petrilli said.

Today was that day, dubbed iFocus, or “no phone” day.

Students were encouraged to give up their phones for the day in a project that also would raise money for Toys for Tots. Phones were locked in the school’s safe before first period, so students would be fully devoted to the cause. Students were to pick up their phones at the end of the day.

Reilsono decided that the proceeds from the day would be donated to Toys for Tots specifically because the holiday season has begun. Petrilli agreed.

“I like it as a charity,” Petrilli said. “I like how all the students, even if they are not involved, are donating to the less fortunate” by sponsoring a participating student. “It’s really nice to help those in need.”

Junior Olivia Allen participated in the iFocus day because she wanted to give back.

“It started off as a little peer pressure, but just like Mini-THON, it really has become about the kids for me,” Allen said.

Junior Taylor Mincin also dropped off her phone for the day to raise funds for the children, but she is probably more used to not having her phone than most.

“I don’t even miss my phone yet,” Mincin said. “I’ve gone through a whole day of school before, even weeks, without it.  I guess I missed it then, but this is easier, I think.”

Some students had trouble with the lack of a cell phone when they tried to access the E-hallpass system that Baldwin started using this year.

Allen said that she had trouble getting around without her phone.

“I’m really bored, and I want to go to the library, but I can’t make an E-Hallpass,” Allen said.

The day, overall, has gone just as Petrilli had hoped it would. While it will be awhile before a fundraising total is determined, he said he is satisfied with the project, and the spirit of giving around the school.

“I’m happy with how it went,” Petrilli said. “I hope it made students see the big picture, and helped us be less reliant on our phones.”