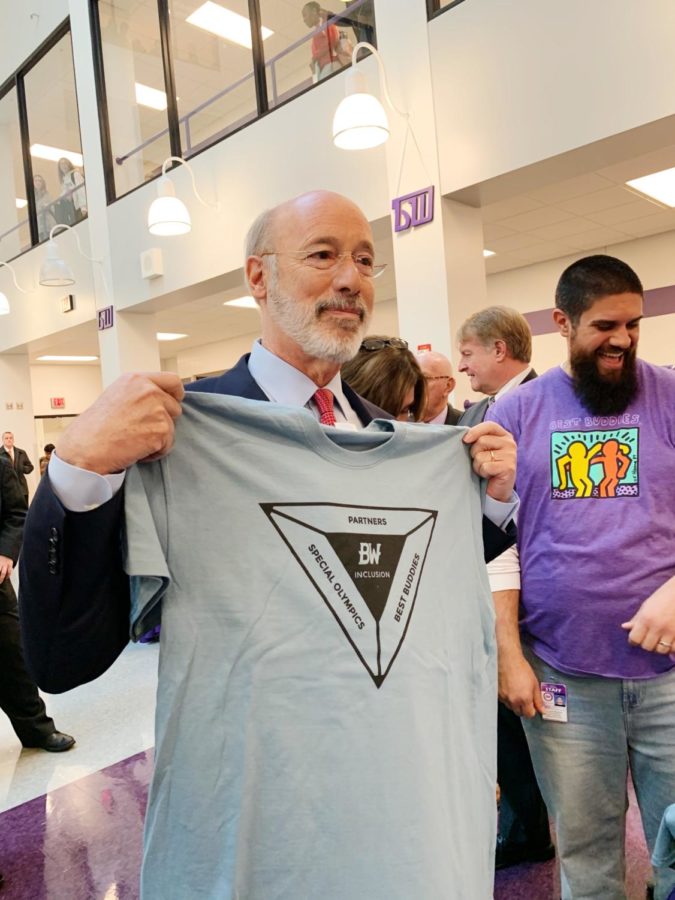 Throughout Wolf’s hour-long visit, he talked to students and sponsors from the Baldwin Bean, Special Olympics Club, ESL program, and Robotics Club.

The governor’s visit opened with a performance by the Highlander marching band in the gym. Then Wolf headed down to the first floor, where the Head Start preschool program is based.

The governor watched the Head Start students operating a small robotic game that introduced them to computer coding concepts.

“The things that are going on here really amaze me,” Wolf said. “It’s really impressive. I went to MIT and I couldn’t understand what the 4-year-olds were doing,” he joked.

Supporting education ensures a better future for everyone, he said.

“We need to do more to make sure that programs like this thrive,” Wolf said. “It’s an investment. If we don’t invest, we’re losing out on those people that we need to take those jobs, and raise those families, and make our communities stronger.”

The governor also pointed out that Baldwin-Whitehall School District has been a recipient of a PA Smart Grant, which went toward supporting computer science programs at the district’s elementary schools.

“Learning how to manipulate technology and code is necessary for the 21st-century economy. Even the most fundamental job requires you to understand a computer,” Wolf said.

“He had to type in his name and how he was doing, and then it said, ‘Hello there, Tom Wolf. Welcome to Baldwin. We are pleased to have you,’ ” Rohe said. “He seemed genuinely interested and loved getting to know what we were doing.”

The Robotics Club showcased its robots during Wolf’s visit.

“We talked about the function and importance of robots and what they offer,” junior Gavin Baroni, the Robotics Club president, said. “He was very easy to talk to and it felt just like he was a regular person.”

“He was enthusiastic and stopped to talk to everyone,” Shandor said.

Wolf also met with ESL students to talk about their experiences in education in the United States.

Baldwin has the second-highest refugee population in Southwestern Pennsylvania. Students from the ESL program created a collage of pictures of themselves with their stories.

Junior Florence Uwizeye, a refugee from Rwanda, said that getting to tell Wolf about her life story was exciting.

“I never knew who he was before today. I was nervous but excited too. He got to learn where we came from, ” Uwizeye said.

Under her picture in the collage, Uwizeye had written, “I came to the United States for more education.”

“If Allegheny County and Western Pennsylvania are going to continue to move forward, it’s only going to move forward with our talented young people having the skills that they need to do the jobs that are the jobs of the future,” Fitzgerald said.

Baldwin administrators said the governor’s visit underscored the district’s strengths, including its membership in an exclusive education network called the League of Innovative Schools.

“This should tell kids at Baldwin that they should be proud to be here and recognize what an awesome high school and school district they have access to,” Tomaszewski said.