Soccer is a family tradition for Sopata 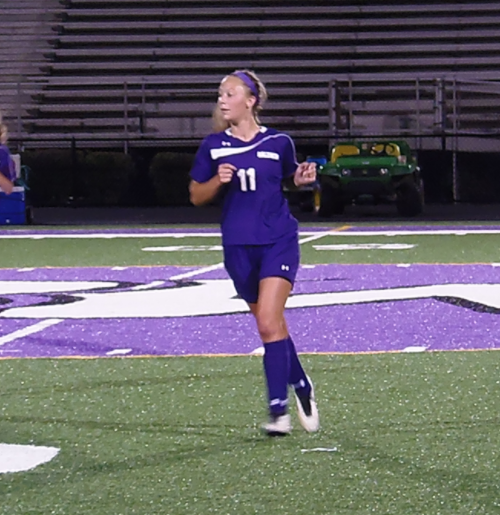 Junior Robyn Sopata has proven herself as a leader on the team throughout the season.

It’s not uncommon to find athletes who follow in their siblings’ footsteps, but junior soccer player Robyn Sopata worked hard and used her skills to become the team’s top scorer.

Sopata has been playing soccer since she was 5 years old. She started playing in-house, which is the equivalent of Little League for soccer. She has remained dedicated to the sport straight through to the present and her role as a top scorer on the high school team.

Her older brothers Mike and Andy played soccer when they were younger.

“They were my inspiration.” Sopata said. “I was definitely following in their footsteps.”

In seventh grade, soccer truly became a passion for Sopata.

“I realized that I wanted to continue with soccer for as long as I can,” Sopata said.

She had made many memories over the years due to her love of the sport, most of which involve her coaches, friends, and family. Her best memory is from when her travel team won first place in a tournament in Hagerstown, Maryland.

“The feeling of winning first place was unlike anything else,” Sopata said. “It was very special to me.”

Her overall enjoyment when playing soccer has allowed her to make plenty of friends on the team.

“She works really hard,” Zandier said. “This year we really were able to start utilizing her talent.”

Sopata has been a top scorer for varsity this year, scoring 11 goals in the 13 games she played. She played a key role in many games.

“Being able to help the team is the best feeling, along with working with my teammates so well,” Sopata said.

While the team struggled in some games and did not make playoffs, Sopata saw progress.

“Although the score at the end of the game might not show it, everyone was working really hard and learning from each other,” Sopata said.

Sopata is looking at a few schools to continue playing soccer in college, but she wants to focus on education for her immediate future.

“My coaches and family have been helping me decide which college is the best to attend,” Sopata said.  “I’ve been doing my best to manage both soccer and school.”