Baldwin helped ease the transition for a new student 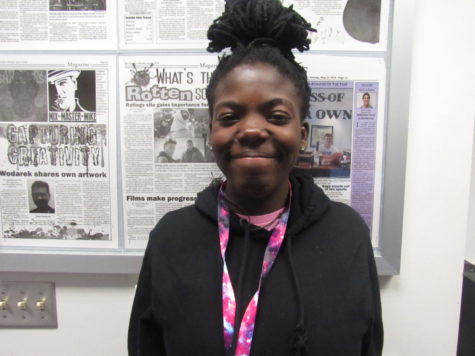 "Though moving from place to place may seem like an exciting journey, There are downsides, such as not feeling you belong and feeling without support." Junior Kimberly Samuel experiences a culture shock at Baldwin.

In the span of three years, I have moved five times. Now that fact may be shocking to people who have stayed in their hometown their entire lives; however, it has merely been routine to my family and me.

To say the least, Baldwin was a culture shock compared to my previous schools. I used to attend smaller charter schools where students would wear a uniform and all did the same thing.

When I first arrived I was immediately welcomed by one of the gym teachers, Mr. Laughlin, and his ambitious energy made me comfortable and I quickly became friends with a majority of the class. The Partners PE program taught me how to see beyond a person’s disadvantage and overall have a more positive outlook on things.

Baldwin also differed from other schools due to the variety of classes offered to fit plans for students’ future careers. I was able to take a psychology class that I found interesting while also taking AP classes that will help me advance in college for different subjects.

Notable people during my experience at Baldwin include history teacher Mr. Reilsono, whose outgoing personality made learning difficult concepts fun; math teacher Mr. Black, who taught me better time management and to ask for help; and my guidance counselor, Mr. DeGregorio, who throughout the year has helped me adjust to the new environment, staying in contact to keep track of my grades and my participation in school activities.

One of my favorite events that happened in school was the Lip Dub, which showed school pride and allowed students to represent the sports or clubs that they participated in. Another one that I enjoyed was the Special Olympics volleyball competition, where athletes from different schools came together and enjoyed a day of games while being supportive of one another.

Though moving from place to place may seem like an exciting journey, there are downsides, such as not feeling you belong and feeling without support.

Despite this, in Baldwin I have been a part of a community that looks past people’s exceptionality and encourages their individuality, with plenty of opportunities for the future. I look forward to what lies ahead in my high school career in Baldwin High School.