Bot team changes it up for battles 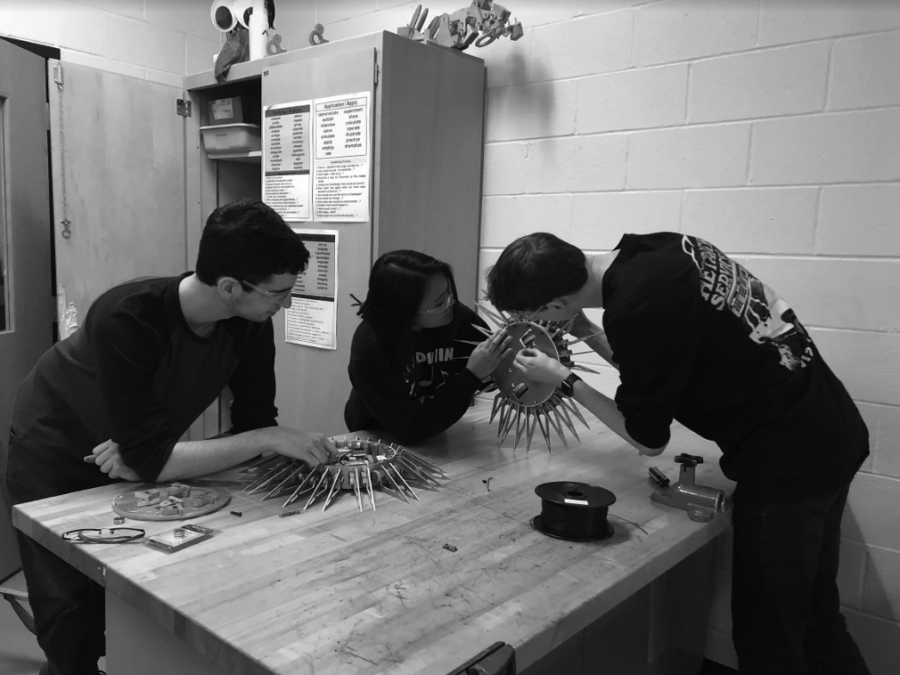 Building the bot: Seniors Joshua Luxemburger (left), Yee Khine (middle), and Billy Andrews work on building a robot for their upcoming competition. This year, the club is working on a new design for their robot.

In the world of the Robotics Club, the sun has set on El Sol.
In recent years, one of the club’s traditional robot designs was called “El Sol,” a circular robot with wedges surrounding it resembling rays from the sun. But this year the club dropped the El Sol design and replaced it with two smaller bots, club President Alexander Kindling said.
Club member Joshua Luxemburger said the competition’s rules allow for two smaller robots as long as they collectively weigh under 15 pounds, and the club decided to try that approach this year.
In previous years, the club had two large robots, and each one was entered into competitions separately. The new approach has them putting two smaller robots into the ring at the same time.
Luxemburger said he enjoys the collaborative work that goes into designing the robots.
“We have a club drive where everyone can share their ideas for the robot, and we work together to figure out how all of the parts will fit together,” Luxemburger said.
Work on creating the robots stretches throughout the school year, and the students must devote hours of time and effort to bring the robots to life.
Club members create a design at the beginning of the year, which they then program into a special modeling software program called SolidWorks.
They cut out a prototype robot in wood to make sure everything fits together properly, and then order the metal parts from a company owned by Kindling’s father for the final assembly.
After the robot is assembled, the club can then enter it into competitions.
Senior William Andrews is the operator of the robots during competitions, and led the club to a first-place finish in preliminary rounds last year.
“It’s always fun. The people I work with are enjoyable to work with. I’ve made a lot of friends through it,” Andrews said.
Both Kindling and Luxemburger agreed, saying the club provides a way to work as part of a team and gain hands-on experience in a field that is in demand.
“I’m trying to go into chemical engineering, which isn’t really related much to robotics, but it still has a similar creative process and it’s mathematically minded,” Luxemburger said.