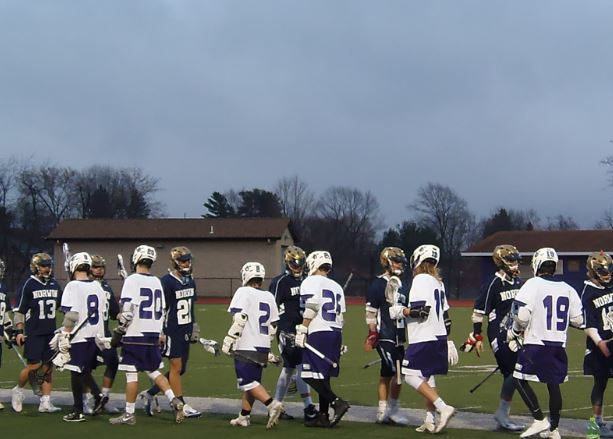 The two teams congratulate each other on a good game. Boys lacrosse took a tough loss Friday.

The boys lacrosse team suffered a heartbreaking defeat on Friday, as Indiana pulled off a big comeback to win 6-5 in overtime.

Baldwin originally started strong, jumping out to 5-1 lead with a hat trick by junior Zach Petit, and goals from Michael Zemaitis and Colton Tamburri.

Indiana made a comeback, though, scoring five unanswered goals after halftime.

“We got too confident,” Pettit said.

The team faced Indiana before in a fall league.

Tensions were high when Indiana defeated Baldwin then.

Petit believes the Highlanders will be put hard to work at their next practice.

“Our goal from here on out is to get the lead early and then work on being able to keep the pressure on and crush the other team,” Pettit said.

The boys will have a shot at redemption on Tuesday with a sectional matchup against USC.