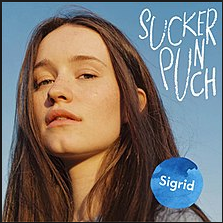 Anyone who actually likes the generic pop they play in Forever 21 will love Sigrid’s Sucker Punch.

While the album is cohesive in its general sound, the outdated teeny-bopper pop style masks the unique qualities of Sigrid’s voice. There is nothing extravagant about the songs, as they follow the typical pop formula and beat. However, Sigrid’s voice really differs from typical pop artists.

Ironically, “Sucker Punch” is the worst song on the album. The instrumentals sound like the background music from Yo Gabba Gabba, the kids’ show with the life-sized monster dancers. There is nothing special about the lyrics either, and they just don’t do Sigrid’s voice justice.

On the flipside, “Dynamite” really lets Sigrid’s voice and emotional range shine, showing the audience what she is capable of when she isn’t drowned in pop beats. This song was first released on her 2017 EP Don’t Kill My Vibe. She should have focused on these slower, more acoustic songs and left out all of the pop.

“Sight of You” has a really detailed string section and feels like it should be in a teen rom-com. Or maybe it sounds like it already has been in a teen rom-com. That deja vu sense of “haven’t I heard this before” is prevalent throughout this album.

Though Sigrid has a unique voice, it gets lost in the generic sound of her music on this album. Hopefully her future albums will focus more on her strengths and less on what’s already been done before.