Bird Box is the off-brand version of A Quiet Place 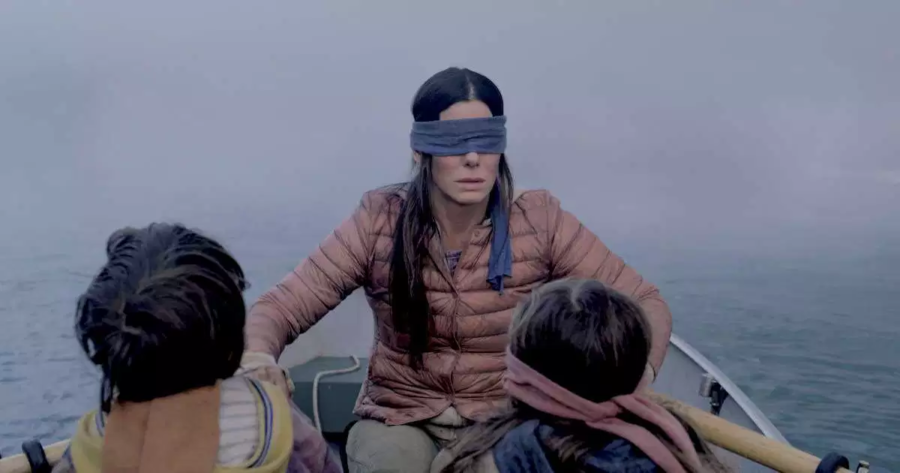 Netflix’s latest thriller, Bird Box, already has attracted major attention on Twitter and YouTube, where a spout of memes and blindfold-inspired challenges have arisen.

Bird Box, based on the book by Josh Malerman, tells an apocalyptic story about mysterious creatures that overwhelm the Earth. Anyone who looks at these creatures is driven to commit suicide. Years later, Malorie (Sandra Bullock) must make a dangerous trip while blindfolded with her children to find safety.

Netflix has had great previous success with its original movies and television series, namely The Kissing Booth and Stranger Things. Bird Box is no different in terms of success. The movie has been viewed by more than 45 million accounts since premiering on Dec. 21. Netflix has reported that Bird Box has had the best first seven days ever for an original on the platform.

Unfortunately, the film came out after John Krasinski’s A Quiet Place and has been critiqued and closely compared to it. Though Bird Box isn’t a poorly made film in any real respect, it just doesn’t compare to the same sensory deprivation film standard that A Quiet Place set.

It is, however, encouraging to see more films turn disabilities into advantages as opposed to setbacks, like deafness in A Quiet Place and now blindness in Bird Box. A scene in the film shows a community of blind people who are spared from the creatures since they physically cannot see.

Bird Box has several plot holes and leaves the audience with various unanswered questions to the point that it’s just frustrating. The film spans over a time period of about five years, and it is difficult for the audience to connect all of the necessary dots within two hours.

Netflix should have taken this concept and stretched it into a TV show. The concept could have been developed much further, to eliminate the pieces of the story that do not make sense at all. As a series, Netflix would have had more opportunities to satisfy fans’ burning questions and expand upon its success.

Part of the reason why people are watching Bird Box is due to Sandra Bullock. She is an incredible actress and is able to pull just the right emotion from every scene. She connects flawlessly with her role, despite the limitation of being blindfolded for half of the film. If she wasn’t the main character, the film would probably not have gained as much attention as it has.

Though not as riveting or thought provoking as similar movies in the same genre, Bird Box is still worth the watch.