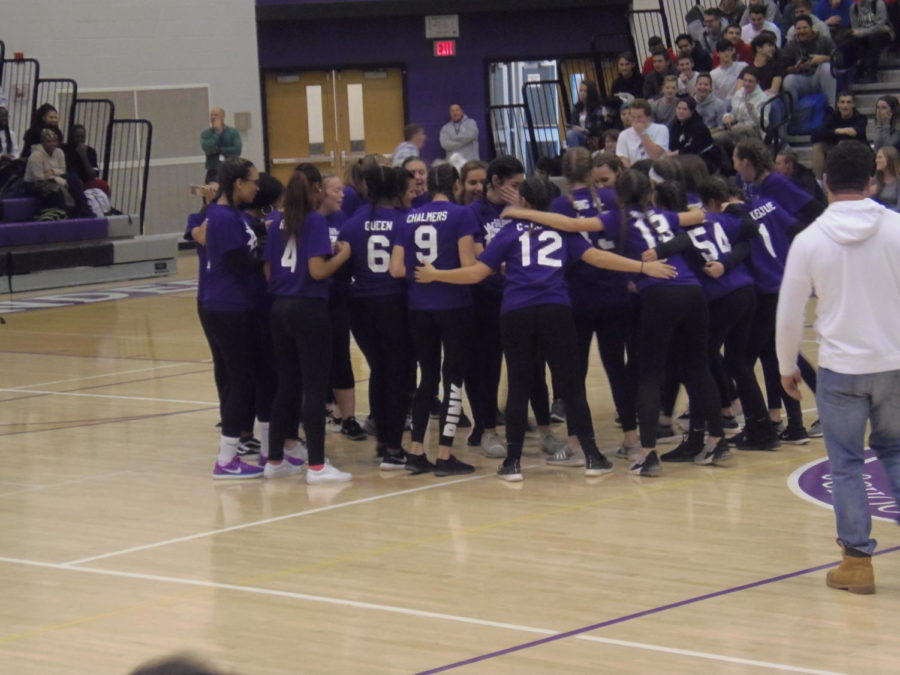 Principal Dr. Walter Graves said that next year, students, coaches and sponsors will have to sit down to establish ground rules for safety during the game.

The Powder Puff game on Thursday, in which the junior girls defeated the senior girls, included some physical confrontations that led to a lot of discussion today at school.

Principal Dr. Walter Graves said that next year, students, coaches and sponsors will have to sit down to establish ground rules for safety during the game.

“I’d be sad if people got hurt,” Graves said.

He said rumors about players being suspended from school or banned from prom are wrong, but he emphasized the need for safety.

“I’d love to keep the tradition, but safety is No. 1,” Graves said.

Assistant Principal Candee Nagy, who was at the game, said some of the behavior was disappointing.

“The game is supposed to be in good spirit and fun,” Nagy said. “We hate that the girls were pitted against each other in a negative way. We should be one big family,” Nagy said.

Nagy said she also wants the Powder Puff tradition to continue, noting that during the game she talked to parents in attendance who had played Powder Puff when they were in high school.

“My take on yesterday’s game is that it escalated quickly with a few on both sides having responsibility. It can be a competitive game without that nonsense,” Trimbur said.

As for a future solution, a zero-tolerance policy could be implemented with girls ejected for any infraction, but the reality is that even flag football is still a contact sport, Trimbur said.

Dr. Dan Harrold, senior class co-sponsor, said there were several factors that could have contributed to the tension during the game.

“It could have been due to the new location (at Cool Springs), or because we had two referees instead of four. Also, the crowd was much closer to the action than in the past,” Harrold said.

Harrold said some of the discussions about the game among students in school today made the confrontations sound worse than they were.

“Despite the minor flare-up, most girls made it a great time. Hopefully this is a tradition than can continue,” Harrold said.

Physical education teacher Chris Crighton, who coached the juniors, also said the confrontations had been blown out of proportion a bit.

“I do believe it was a little excessive. But the game was great. The girls were excited and very into it. They showed passion,” he said.

One player from each team was ejected, but after that the game was controlled, he said.

Junior Emily Rauch said the lack of good sportsmanship detracted from the game.

“I guess the game was fun, but it was way too intense and people took it too far,” Rauch said. “It’s a game and it didn’t count for anything.”

Senior Tina Odato thinks the hallway signs the teams made had something to do with the tension. The signs started out simply motivational, but later some signs started to take digs at the opposing team, Odato said.

“I think the posters were a big part of it,” she said.

Senior Lexi Shandor had a different take on what sparked the confrontations.

“It was more personal with people not being friends on the other team,” Shandor said.

Also, the Powder Puff assembly, which was new this year, could have put too much focus on the two teams and their rivalry, Shandor said.

Shandor had a suggestion for reducing animosity at the game.

“Homecoming Week would be a better time for the game, because there are a bunch of activities going on. You’d have the Powder Puff game one day and then the next would be about the car smash. There wouldn’t be so much direct attention on the game,” Shandor said.

Harrold, meanwhile, said students such as Senior Class President Paige Ernst deserved recognition for making the Powder Puff game happen at all this year, despite the weather setbacks that resulted in earlier postponements.