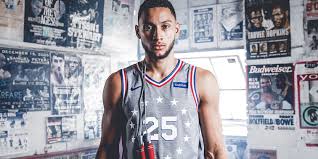 For this new collection of jerseys, the teams went in creative directions to try to honor their cities and the icons from it.

With the NBA season getting under way, there is little room for surprises. Golden State is still a dominant force in the West, Cleveland is bad again without LeBron, and Dwight Howard is on yet another new team. However, fans can look forward  to the new “City Edition” jerseys that have been unveiled for the 2018-19 season.

For this new collection of jerseys, the teams went in creative directions to try to honor their cities and the icons from it.

The Brooklyn Nets’ jersey include a multi-color trim meant to represent the diversity in the New York borough, which is full of people of different races, religions, and ethnicities. The Nets also pay homage to local rap star Biggie Smalls in the unique jersey design.

The Minnesota Timberwolves also honor their own hometown legend and musical icon Prince. Minnesota strayed far from its normal blue and green and put together a Purple Rain inspired jersey with a signature Prince font.

With all these interesting back stories behind these designs, several teams fell short of bringing something new and creative. The only good thing about the Cavaliers jersey is that Kevin Love is wearing it and not much else.

The Clippers have not been able to do a whole lot right in their history and their new shirt’s blurred wordmark looks reminiscent of the traditional Lakers logo and seems like a desperate attempt to compete with the more popular Los Angeles basketball team.

The Bucks tried to honor their hometown industry of Harley Davidson, but instead created some kind of McDonald’s tribute colorway that makes absolutely no sense.

The NBA has always found a way to be more creative than any other professional sports league, drawing inspiration from the cities, the icons, and the fans that make up the league. Perhaps the new jerseys will be a good distraction from the fact that the Warriors will most likely win the championship… again.