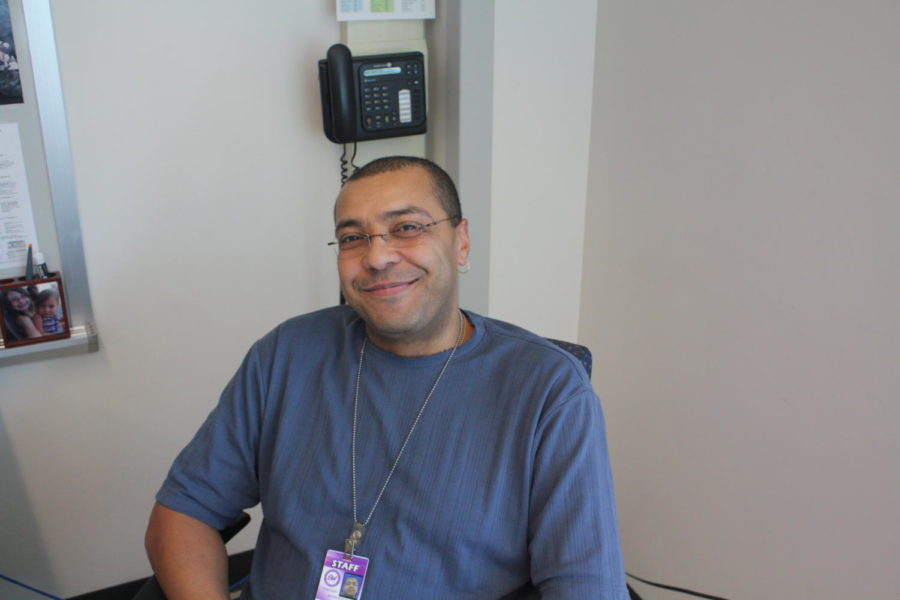 Staff diversity: Math teacher Bryan Black has only worked with one other African-American teacher in his 22 years at Baldwin. Teacher diversity remains a national issue.

In his 22 years of teaching at Baldwin, math teacher Bryan Black has only ever taught with one other African-American teacher.
Black was influenced in college to go into education by his advisers because of the lack of people of color in teaching positions. As a youth, he had always noticed a lack of diversity in teaching.
“I saw that lack of diversity growing up and it’s a reason I wanted to teach, to bring that asset of diversity to schools,” Black said.
The lack of diversity in education is not limited to Baldwin. It’s a national issue.
A recent New York Times article indicates that a majority of teachers nationwide are white women, and points out that students tend to perform better when they have diverse teachers.
The lack of a diverse teaching staff affects all children, a University of Pittsburgh official said.
“By perpetuating a predominantly Eurocentric curriculum, it is not just black and brown children who miss out on their own histories. White children also miss the chance to learn what is lost in the trade-off for a winnowed idea of what truth and history are,” Leigh Patel, Pitt’s associate dean of equity and justice, said.
Locally, many high schools struggle to find diverse staff. It is difficult to build a diverse staff because the pool of minority applicants is small, Principal Dr. Walter Graves said. Most minorities tend to go into other fields where there are greater incentives, he said.
“They go into education if they really want to, but the incentives in other industries are greater,” Graves said.
Vice Principal Candee Nagy, who previously worked at Woodland Hills, said that diversity in staff is an issue in other local districts as well. In recent years, Woodland Hills has had only two minority teachers, despite having a student body that is about 70 percent black, Nagy said.
Schools say they desire to hire people of color, but also want to choose the best candidate for the job rather than solely base the decision on race.
“We interview everyone the same, and we truly look for the best quality person in our hiring,” Graves said.
Patel said one long-term solution for increasing diversity in the education field is for high schools to teach today’s students about more diverse cultures.
“If our curriculum shifted to reflect more of that reality,” more minority students might decide to become teachers, she said.
Universities nationwide are trying to solve the issue through outreach in communities of color.
“Equity and justice are foundational anchors for the (Pitt) School of Education,” Patel said. “The Center for Urban Education, our Community Education Centers, and our graduate students of color leadership all attract interest from students of color, as well as other marginalized populations,” Patel said.
At Baldwin, Black said he has received correspondence from local universities asking him to recruit youth of color to go into education and increase diversity in the field.
Baldwin counselor Sima Misquitta originally got a business degree, but decided she wanted to go into education when she went to a meeting at her sister’s school and got a firsthand look into what counselors do.
Misquitta loves her current job, and she believes that a diverse staff in schools is important for students, she said.
“It’s important that there are administrators, counselors, and teachers from all different backgrounds so kids can see role models in adults who work with them every day,” she said.
In addition to being a counselor at Baldwin, Misquitta is a part of multiple counseling boards on the local and state levels, where diversity is low.
“I’m often the only minority in the room,” she said.
Black also did not plan to be an educator. He started out with an engineering major at Indiana University of Pennsylvania, but changed to education when his adviser made the suggestion.
“Since I knew the number of minorities in teaching was low, I knew it would be easier to get a job,” he said.
Black believes that minority students function better and feel more comfortable when they see representation of themselves through teachers.
“When students have a teacher of their same background, they can connect with them more easily because they know more about their culture,” Black said.
Senior Thembi Mtinziga, who moved to Baldwin in fourth grade, has only had one minority teacher and one minority principal at the two schools she has attended, she said.
“Diverse staff is a national issue. There are students who can’t relate to their teachers, and it results in a low quality of education,” she said.