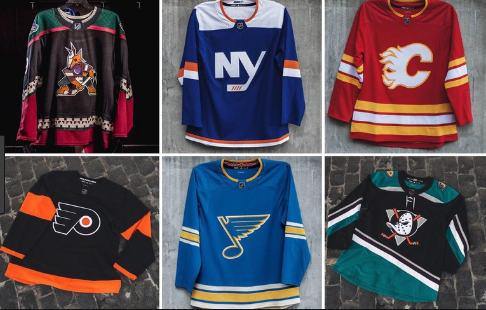 Some of the new NHL retro jersey's for different teams.

Young talent, fast play, and lots of goals are now complemented by a new wave of sleek alternate jerseys in the NHL.

For the 2017-18 NHL season the league made a switch from Reebok-designed jerseys to having Adidas manufacture the teams’ sweaters. Although the league made that switch over a year ago, only starting this season are teams able to present and wear their alternate jerseys.

Some of the more fascinating designs include the return of the Native American kachina-style designs the Arizona Coyotes used to wear back when that franchise first began in the late ‘90s. Also, the Anaheim Ducks unveiled an alternate jersey that resembled their original jerseys, which were based off of The Mighty Ducks movie trilogy.

Another fan favorite of these new third jerseys include the Carolina Hurricanes’ throwback to the Hartford Whalers jersey. The Whalers jersey is often grouped together with some of the best jerseys in NHL history. The Hurricanes announced that they will wear these retro fits during two games this season to honor the team that came before them.

Teams like the St. Louis Blues, Calgary Flames, and New Jersey Devils look to brighten up their third jerseys with flashy colors incorporated in their alternates.

Although many of these jerseys are eye-catching, there are some that are not as impressive. Teams that failed to add flavor to their jerseys include the New York Islanders and Edmonton Oilers, among others.

As many teams look to rock their new threads throughout this season and years to come, many teams have yet to unveil their newest alternates.

Not only do these new jerseys increase interest among fans, but the league will gain a lot of revenue from the sales of the alternates — making it a being a big score for the NHL.