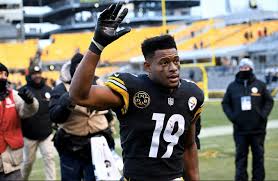 Steelers fan favorite JuJu Smith-Schuster surprised everyone and hung out with fans, cheerleaders, and the players before the game and during halftime.

On Friday night the Baldwin football team lost at Bethel Park 28-7, but an unexpected guest made the night one to remember.

Steelers fan favorite JuJu Smith-Schuster surprised everyone and hung out with fans, cheerleaders, and the players before the game and during halftime.

The game was voted on by the fans as the Steelers’ high school game of the week, and with this came a representative from the Steelers to the game.

It turned out to be Smith-Schuster, the popular wide receiver. He did the coin toss to start the game and proceeded to shake all of the players’ hands.

“It was an honor because he is an experienced football player, and for him to take time out of his day to come and watch our game was really cool,” senior co-captain Lucas Perfetti said.

Smith-Schuster also went into the locker room during halftime to give the team a pep-talk. He said, “You guys are down 21-0. You’ve got a chance to respond. It’s not over yet,” according to senior Tyler Gurchak.

“I thought it was good,” Gurchak said. “It really drove the start of the next half as we gained momentum.”

Smith-Schuster also spent time with the cheerleaders and even took part in their routine.

Senior Paige Ernst said he asked if the cheerleaders could teach him how to do a flip.

“He is just a fun guy and has just as much energy as we do,” Ernst said.

“It was super cool and motivating to have a good game and an extra bit of fun added in when everyone wanted to talk to him and take pictures with him,” Young said.