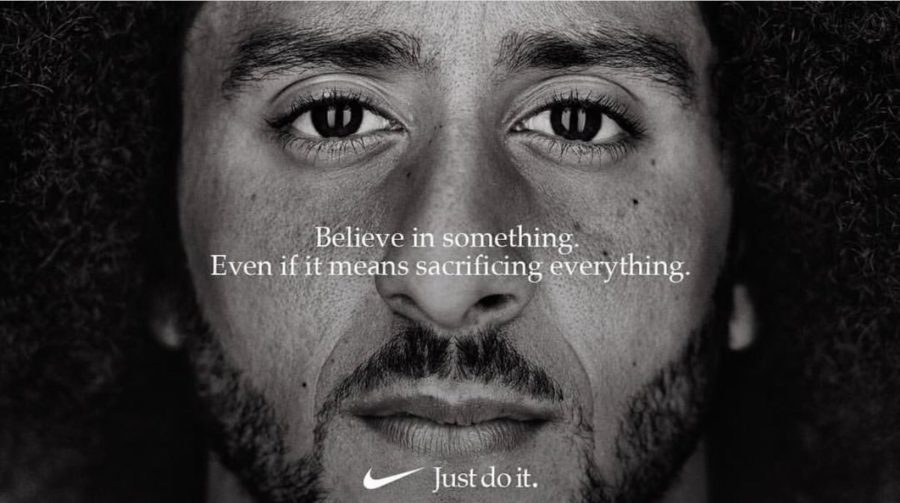 As with anything that involves Kaepernick, people were immediately divided on this issue.

Major brands will do anything to make a profit, but they usually try to do so without creating a controversy. And yet on Labor Day, Nike made Colin Kaepernick an official Nike athlete and made him the face of the company’s 30th anniversary “Just Do It” marketing campaign.

As with anything that involves Kaepernick, people were immediately divided on this issue.

Athletes and celebrities took to social media to share their feelings. LeBron James, Zach Braff, and DJ Khaled were just some of the big names to come out in support of Nike’s decision. On the other hand, the soundman for country duo Big & Rich posted pictures of his Nike socks with the “swoosh” logo cut out.

Obviously people are once again torn over a bold move involving Kaepernick.

One of the most compelling situations to come out of this issue is how the NFL will react. Commissioner Roger Goodell has made it clear that he wants the aftermath of Kaepernick’s national anthem protests to be brushed under the rug. Goodell has put strict rules into place to try to prevent players from protesting during the anthem. Meanwhile, Kaepernick is suing the NFL for collusion and now the case is likely to go to court.

So the question remains: Why would one of the biggest clothing and sneaker brands sign one of the most controversial athletes?

First of all, it’s not the first time Nike has signed a controversial athlete. Michael Vick has been a long-time Nike athlete, and even after all his issues with going to jail for involvement with dog fighting, the company still brought back one of his most popular shoes. Who would you rather have as your star cover athlete: someone involved with dog fights, or someone who tries to give a voice to black America?

Secondly, this move puts Nike into the perfect position to take advantage of its relationship with the NFL. The NFL and Nike have a deal that runs through 2028 and all of the league’s merchandise and jerseys are made by Nike.

Nike has practically built the fan experience that everyone has with their teams. With this move, Nike puts the NFL in a sort of checkmate scenario. As long as Nike is making the NFL money, the league will have a hard time arguing against the ad.

Lastly, this ad campaign will get people talking. Call it controversial or bad publicity, but Nike officials have expressed that they are firm believers in the fact that any publicity is good publicity.

In the end there will be people talking, then listening, and then buying. As far as Nike and Kaepernick are concerned, they’ve made the right choice and they will continue to “Just Do It.”