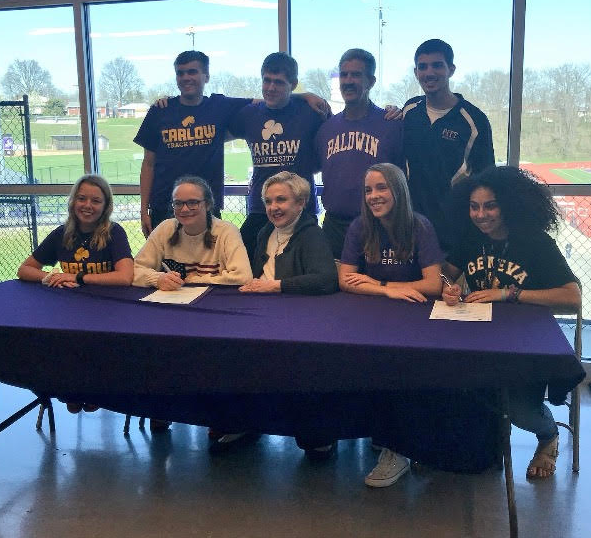 With commencement fast approaching and senior exit interviews and finals preparations under way, many seniors at Baldwin are beginning to say goodbye to teachers, coaches, and teammates. However five members of the cross country and track teams will continue to run alongside each other, as they have committed to universities within the same division.

They were among a group of 11 Baldwin students who signed letters of intent on Monday.

Emily Yosi is going to Chatham University for the five-year physician assistant program and its cross country team. Yosi looks back of her last four years of running favorably.

¨I am walking away from Baldwin XC having learned so many lessons and developing a true passion for running. I´ḿ so glad I can continue to do what I love in college and continue to make new friends and set new personal records,´´ Yosi said.

Also in her division is Carlow University and its cross country program, which Delaney Pavlick, a senior majoring in pre-veterinary medicine biology, committed to.

¨Running in college will be completely different, but I´m happy to have some of my high school teammates there to make things seem familiar,¨ Pavlick said.

Seniors Kevin Sheehan and Michael Randal are also committing to Carlow to run, majoring in human resources and nursing, respectively.

¨Running with my best friends in college will push me to work harder as well as keep the comfortable atmosphere I´ve been used too,¨ Ballard said.

Other runners signing on Monday were seniors Joseph Bolla to University of Pittsburgh Greensburg for teaching and track, and Corina Pittman to Warren Wilson College for cross country and outdoor leadership.