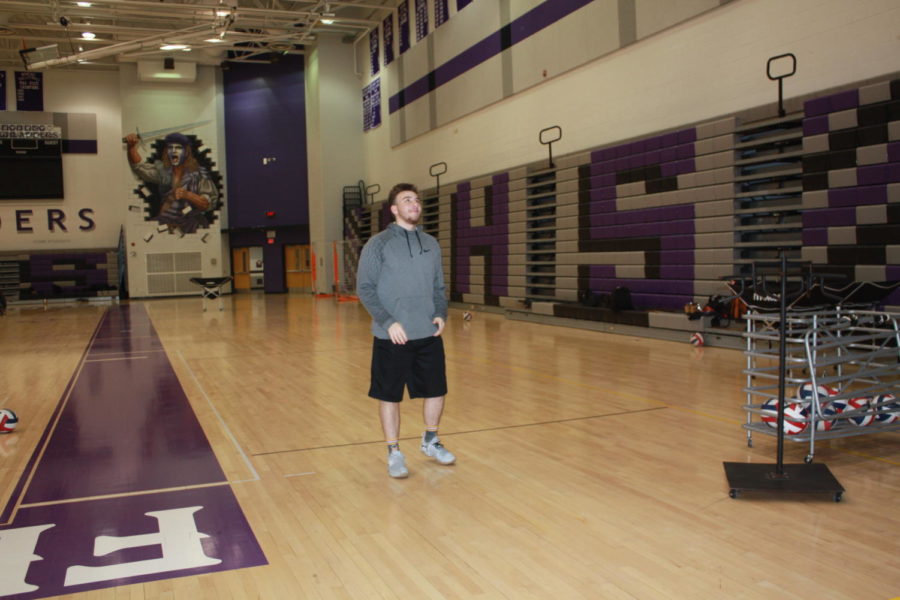 Looking for results: Senior Dante Parente prepares to set the ball in practice. The team looks to have a winning season.

Chemistry is more than a science class for senior volleyball players Ben Remlinger and Dante Parente.
Both players’ volleyball careers started in middle school, but the two were opponents instead of teammates. That all changed when they both made Baldwin’s J.V. volleyball team.
“Dante went to St. Sylvester and I went to St. Elizabeth, but then we intertwined freshman year,” Remlinger said.
The two grew together as players and teammates throughout their season on J.V., which led them to being the only two sophomores to be on varsity the following year.
Parente and Remlinger have continued to play together for all three of their varsity seasons, helping them establish a strong connection on the court.
“We’ve played together a while, so we know each other’s tendencies,” Parente said. “That helps us because we always know where we each are on the court.”
Remlinger said their teamwork will also benefit the team as a whole as they step into leadership roles.
“As captains, we’ll lead our team through any adversity we may face this year,” Remlinger said.
Remlinger has a lot of faith in the team this year. While graduating seniors were lost last year, the team will have a lot of new and returning talent to replace them. He also feels that he and Parente will be able to keep up the team’s perseverance and motivate them to push themselves.
With all these forces in play, Remlinger has high hopes for the season.
“We should place well in our section and make playoffs,” Remlinger said.
Both said they want to make a deep playoff run to end their high school careers.
“We need to make this last year worth it,” Parente said. “I think we can come in and compete at a high level.”
Both Parente and Remlinger clearly have high aspirations, but they will make sure to enjoy the rest of the time they have to.
“I have loved my time playing at Baldwin. It’s been so fun for me,” Parente said. “I’ll miss playing with Ben and the guys but I won’t forget all the memories.”