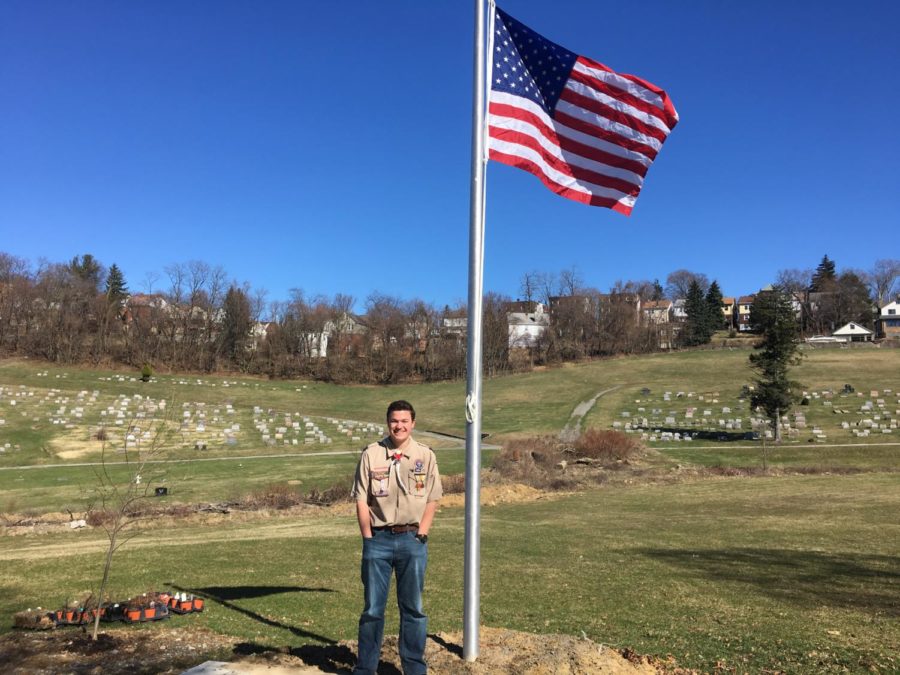 Patriotic and proud: Junior Thomas Rechtorik shows off his project honoring Civil War veterans. Rechtorik is one of several students who have worked on earning the Eagle Scout rank.

Eagles are a symbol of power and strength in America and many other countries around the world. Much like the birds themselves, Eagle Scouts represent the best and brightest of the Boy Scouts.
Several Baldwin scouts have earned or are expected to soon earn the Eagle Scout rank. As part of that process, they must design and cary out a project that impacts their community.
Junior Thomas Rechtorik has been working on a Civil War memorial at a Birmingham Cemetery on Brownsville Road for his final Eagle Scout project. The memorial will include a flagpole, benches, and some landscaping around the area.
“So far the concrete pad has been poured and cut, two trees and rose bushes have been planted, and the flagpole is in,” Rechtorik said. “I have a bit more to do and probably a month or two left.”
Rechtorik did not originally want to memorialize the Civil War for his project, but instead all of the men and women buried there who were in the military. However, the cemetery owner’s reasoning swayed Rechtorik to do the Civil War project.
“He wanted the monument to be dedicated to the Civil War because the cemetery Civil War markers and the tombstones are starting to fade away and crumble,” Rechtorik said. “He didn’t want the war and its veterans to be forgotten because of the rain and other elements.”
Senior Ron Musto recently finished his Eagle Scout project for St. Elizabeth’s Church.
“I actively go to that church, so I thought it would be a good project for my community,” Musto said.
Musto spent a month planning and then three days building a wall outside St. Elizabeth’s to help stop runoff issues when it rains, which also will protect their air conditioning unit.
“It’s not a retaining wall, but it’s sort of like one,” he said.
Senior Corey Donovan successfully finished his Eagle Scout Project for Jefferson Hospital. He wanted to make the grounds safer for patients and their families.
“You couldn’t see the crosswalks,” Donovan said. “Bushes and plants were overgrown. There were walls falling apart.”
Donovan spent about three weeks fixing up the overgrown foliage and said he was pleased with the work he did.
“I felt like the area could be safer for the people. I was happy to help,” Donovan said.
Senior Macin Watson was recently approved for his project to fix up the Children’s Theater at South Park, and started working in early March.
“My family goes there a lot,” Watson said. “My little brother does a lot of plays and skits, so it would mean a lot to him.”
Watson is at the theater often, so he saw that repairs were needed around the area.
“I plan to build benches and clean up the backstage area. I know they would really appreciate it,” Watson said.
Purbalite staff writer Nick Pouch finished his project building toy and food storage sheds at the Pittsburgh Zoo at the beginning of the school year last year.
“My family has always had fun at the zoo and my uncle even helped design the shed for me,” Pouch said.