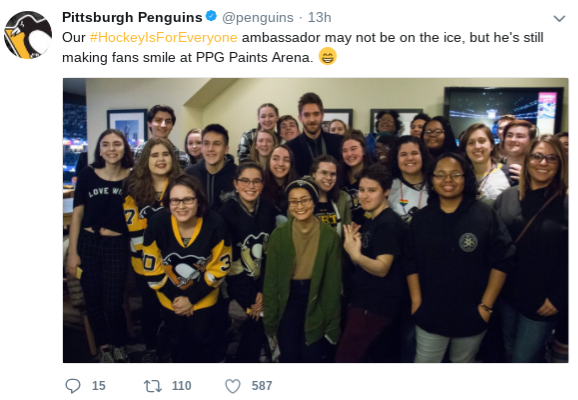 Watching a Penguins game from a suite at PPG Paints Arena and meeting goalie Matt Murray would make the night of any hockey fan.

Juniors Ethan Hoey and Marris Miller, along with other members of Baldwin’s Outreach Club, got to experience all of that on Monday night, watching the Pens defeat the Calgary Flames 4-3 in overtime courtesy of the Delta Foundation of Pittsburgh.

“This was the first time something like this has happened for the Outreach Club, and it was a great experience for the students,” club sponsor Caroline Babik said.

Monday’s game was part of the NHL’s “Hockey Is For Everyone” initiative, designed to promote inclusion and diversity. Babik praised the effort.

“It is important for celebrities or athletes to support inclusivity and help kids feel like they belong,” she said.

Outreach Club members got to meet Murray, who came into the suite for a photo that ended up on the Pens Twitter feed.  He was the team’s sponsor for the inclusion game.

”He came into the box and we got some pictures with him, but we didn’t get to talk too much,” Miller said.

And then there was the game, which ended with an exciting overtime win for the Pens.

“This game was a lot of fun and very interesting. I was happy to see us score two times in the first 10 minutes of the game,” Hoey said.