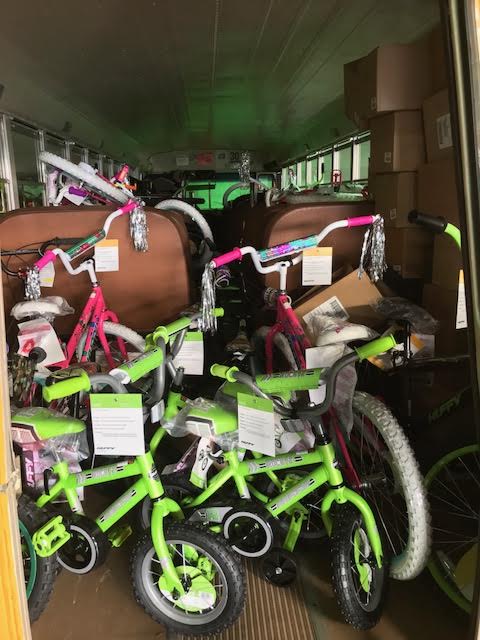 Baldwin’s buses will be transporting bicycles instead of students tonight at the school board meeting.

Diane Plish, an employee at the district bus garage, came up with the idea to buy bikes and deliver them to Toys for Tots. She said that the garage usually makes a donation to a charity during the holiday season, but thought they could do something a little more personal this year.

Instead, everyone at the garage donated money and Plish purchased bikes and helmets.

Plish, with the help of her co-workers May Prokop, Patty Jones, and Norman Schwartzmeier, went to Walmart and Kmart to buy the bikes and helmets. After purchasing the items, the group proceeded to pack the bikes onto a school bus. In total, they purchased 30 bicycles, most of which have training wheels, and helmets to donate to kids.

“It’s something nice and their parents have something to give them,” Plish said.

The bus with the bicycles will be displayed at the school board meeting tonight and delivered the Thursday morning to Toys for Tots.

Plish is hopeful to do the bike drive again next year and make it an annual event.